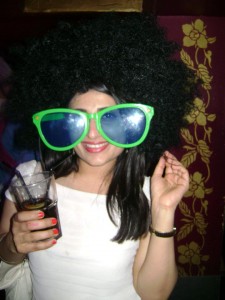 Q. What inspired you to write …And then she opened a can of worms! ?

When I decided that I wanted more than just make my friends laugh at my witty anecdotes or get multiple likes for the funny status updates I posted on Facebook. This is going to sound very clichéd but it is very true – writing is something I always wanted to do and this time, rather than just think of doing it, I decided to put pen to paper (fingers on my laptop keys to be more precise!) and finally start writing. I brainstormed with a couple of ideas but at the end I chose to write a story which I could identify with and have a lot of fun writing.

Q. I found it an amusing, light hearted read, but ultimately something that will resonate will young Asian women. Who did you write this book for?

Firstly thanks for your kind words as the book is meant to be just that! The term “young” has become blurred in recent times, what with 30 being the new 20, 40 being the new 30 and so on… The book is aimed at Asian Women between the ages of let’s say, late teens to early forties. Basically, those who enjoy a good old-fashion chick-lit and one which has an Asian twist to it which I hope puts a dent in the stereotypes some still have about Asian Women.

Q. Why do you think there’s a lack of British Asian chick lit on the market?

As said above, even though it is rapidly changing with shows such as the amazing “The Mindy Project” and the brilliant Archie Punjabi in “The Good Wife”, there is still the stereotype of (most) Asian women being good little girls who go with their head rather than their heart which doesn’t exactly set the premise for a chick-lit with twists and turns aplenty. To quote a cliché, look at the adverts on most Asian matrimonial websites…(the man’s advert) Professional, well-educated man working for a blue-chip company earning xxxxxxx amount per annum seeks a beautiful, intelligent and well-spoken wife from a similar background….. what on earth is that?! It’s spending the rest of your life with someone but it seems more like a CV for a job interview!

Q. You’ve used multiple POV’s to move the story along, but I found it quite distracting. What made you decide on giving other characters a voice and how did it help to shape the book?

I’ll give an example of this. Mandy’s brother Bikram has embarked on a romance with a handsome Norwegian diplomat who he has met online (like most relationships nowadays, how about a chick-lit on boy meets girls with a click of a mouse or a swipe on Tinder instead of boy meets girl in a bar/wedding/party?) but has to be discreet about the relationship as he is touted to be the next big thing on (cooking/lifestyle) T.V. and his bosses are trying to project him as a handsome ladies man… if only he didn’t like men so much! If the story has been told purely from Mandy’s perspective, the readers would not be able to get a proper insight into Bikram’s life and the relationships that have shaped him to be the person that he is now, similar to the other two characters whose POV’s also form an integral part of the story. The readers would have only gotten Mandy’s perspective the whole time and have to base their judgements purely on what she thinks.

Q. Mandy’s smart, savvy and sophisticated. She explodes a lot of myths that people still have about Asian women. What were you hoping people would take away from reading your book?

That if there ever was a Sex and The City reboot, this time one of the female leads (either Samantha or Carrie preferably) would be Asian!

Q. It’s often said that first novels are autobiographical. What experiences of your own did you weave in to this first book?

I put in a gay love angle in the book as one of my family members came out many years ago. While some of my family didn’t exactly jump for joy at this news, most were really supportive about it and the ones who initially weren’t, have come to accept it. Also, Mandy’s dating pattern and rejection of convention is something I can identify with and I’m sure every family has someone who at some point of time in their life, has been a victim of the unrequited love syndrome.

Q. Tell us more about the writing process and how you fit writing into your life?

I am a designer but writing has been a long-time love of mine and I wrote this book when I decided that I want to do more than just write funny Facebook statuses and get multiple likes for them. I first do a brief outline where I decide the breakdown of the story and then write the book around it. The great thing about writing is that it can be done anywhere…sitting in Starbucks with your laptop on a sunday morning, sitting on your couch with a laptop after a long day’s work with a glass of wine or herbal tea to give you company, on a holiday, during your lunch break etc. This makes it very easy to fit writing into my life. Having an over-active imagination does help though!

And what helped you write those particular intimate moments? The kissing and ahem, more?

It’s not exactly 50 shades of Grey now is it?! (laughs) As it is a chick-lit, there has to be some kissing and as for the ahem  part as you very nicely put it, I only give a hint or two before the scene ends and the reader knows exactly what is happening or going to happen. There was nothing really that helped me write those scenes but yes, those scenes did undergo more re-writes than any other!

Q. You decided to self publish, could you tell us more about that, and what advice you’d have for someone looking to follow your path?

Do it only once you have exhausted all other options and that you have 10000000% to the power of infinity conviction about your work. While I did not fall into the trap and shell out alot of money, I did have to spend a bit. While the kindle/ e-book versions are at a good competitive price, unfortunately the paperback and hardback versions are priced at a not very reasonable and competitive rate. This is because with self-publishing, the hard copies of the books are only printed out once an order is placed which is a more cumbersome process than bulk printing and this is the reason for the price increase over which, I unfortunately have little control over. That said, I have limited hard copies at my disposal which I am giving for a much lower price – am I shamelessly allowed to plug this in the interview? If so, yes please do contact me for the discounted hard copies!

You can choose the option of bulk printing the books so that the hard copy prices are more competitive but this is a very expensive process and I am grateful to the kindle/e-book avenue thanks to this!

Q. Finally, in a twist of fate, life imitating art, did you base any of your characters on people you know and did it get you into any trouble once they’d read your book?

I didn’t get into any trouble at all but a few people who have read or are reading the book do laugh and ask me “100% fiction eh?!” to which I simply smile and say, not very convincingly judging by their laugh to my answer “But of course!”

AR Quar Born in New Delhi and living in London for the past eight years, A.R. Quar is a fashion and print designer by profession. Born a naval brat with a passion for travel and all things creative, she finally decided to put pen to paper (or type away on her laptop to be more precise!) and write the novel she has been talking about.

She recently crossed one of her bucket list by doing a few stand-up comedy gigs where she risked being pelted with what she hoped were fresh as opposed to rotten tomatoes.

Besides her love for Avicii and Icona Pop, she is a movie buff especially of world cinema and the thriller genre, which she can spend all day talking about.