Emerging talent, Mahsuda Snaith was named the winner of the SI Leeds Prize, at an awards ceremony at the Ilkley Literature festival (October 15) and winner of the 2014 Bristol Short Story Prize a week later (October 25). 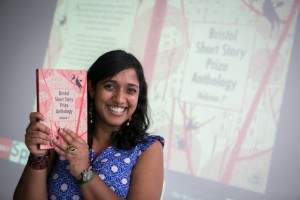 Snaith captivated the judges of the Bristol Short Story Prize with her short story, The Art of Flood Survival, to win the £1,000 first prize. Sara Davies said of the winning story: “Mahsuda’s story about a young Bangladeshi servant girl is tender and tough, and impressed us all with its sureness of touch. The voice of its young narrator, with its mix of hope and cynicism, longing and pragmatism, is both believable and compelling, and her determination to turn the world to her advantage against all odds is beautifully and boldly explored with some lovely touches of sharp humour.”

Mahsuda said of her triumph: ‘I’m a bit stunned by it. I’m over the moon about winning especially because I’ve read the Bristol Short Story anthologies before, (they are) always such good quality.It’s amazing, I was just happy to be in the anthology. Winning is a massive bonus.’ 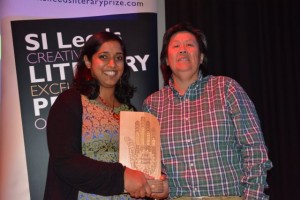 Now in its second year, The SI Leeds Prize is a biennial award celebrating the best unpublished fiction by Black and Asian women. Mahsuda Snaith, a Leicester Writers Club member said: ‘It is a great honour and privilege to win the SI Leeds Literary Prize 2014. I’ve wanted to be a writer since I was 8 years old but coming from a small Bengali family and growing up on a Leicester council estate it seemed like a crazy dream. To win this award has given me a great confidence boost and helped me get one step closer to making that crazy dream happen!’

Mahsuda took home a carved wooden plaque, £2000 prize money and the chance to have her novel published by independent press, Peepal Tree press.

Chair of judges, Leicester author Kerry Young said: ‘Being asked to act as head judge was a huge honour. The result was a stunning shortlist of unexpected and intriguing stories that speak to the common heart.’

Snaith, who was also a finalist in the prestigious Mslexia Novel Writing Competition earlier this year, offered advice to aspiring writers: ‘You don’t need lots of money and courses in writing to be a writer, you just need to read lots, get better, and keep on writing.’