Skip to content
Q. Tell us about your debut novel, The Normal State of Mind?

The Normal State of Mind is a story of love and friendship. The story revolves around the friendship between Dipali, a widow and Moushumi, a lesbian, and the issues they face in their lives. It is set in 1990s India, the time around the Hindu-Muslim riots and the bomb blasts in Mumbai. As the blurb on the book says:

It’s the end of a millennium. India has made tremendous progress in science and technology, but in these times of economic boom can a friendship between two women give them the power to defy society, and law, to reach for their dreams?

Dipali, a young bride, is determined to make her marriage a success story. But her plans are cut short when her husband is killed by a bomb blast in Mumbai and she struggles to find her place in life. In Calcutta, as Moushumi’s parents discuss potential husbands, the school teacher prefers to escape to her high-flying lover. But how long can she keep her forbidden affair secret beyond the safe walls of glamorous art crowd parties? In the midst of communal riots, India too has to make her own decisions about which traditions she must keep, and which she ought to let go. At the end of it all, who can decide what is the normal state of mind?

Q. What inspired you to write the book?

I started the novel as a dissertation for my Masters in Creative Writing at Cardiff University. I knew that to be able to stick with the novel to completion, I’d have to write about a) something that I knew about and am familiar with, therefore it is set in Mumbai and Calcutta and explores friendship between women; b) look for answers to questions I had not asked earlier: homosexuality and its representation and acceptance in India and c) explore the concepts that are so important to me ie  freedom of expression and freedom to live as individuals without having to conform to society (especially in the case of women). 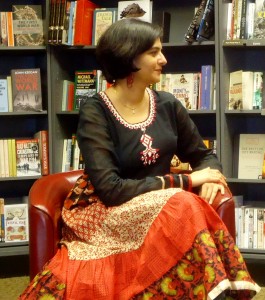 Q. You’ve become known for writing wonderful short stories. What was the novel writing process like for you and how did this differentiate from writing a short story?

The two forms have very different processes. The idea for my short stories always begins at the end. I think of the ending first, usually the last line and then work towards the beginning. (That last line may not survive to the finished piece, but it’s always the beginning.) While writing the novel, I thought of the end at the beginning as well. But it didn’t work. It took a very different approach, and I think patience was called for in huge doses.

The first mistake I made was to begin writing the novel from Chapter One. But Chapter One is the hardest to write. It is a misconception to think that writing should be linear like reading. Writing a novel is more like patchwork, complete chapters/scenes in a pattern one is comfortable with and then sew it into sequence.The best advice I got from my tutors in Cardiff Uni was start from a point that excites you. That will keep you going. So I wrote the climax, then the end. Chapter One was the last thing I wrote!

It took eight years to write the book, simply because time was short. Family commitments, jobs, house moves all came before the book. These commitments affected my novel writing, as I was always giving priority to other things. But I kept writing short stories and really enjoyed doing so. After finishing the first draft, once I had the whole novel finished, it was psychologically great for me. I’d done it. Of course, the book went through several drafts even before my editor set eyes on it! But I have learnt a lot from writing the novel. Would I write another novel? Absolutely, but perhaps with a definite deadline this time.

Q. I loved that your novel featured two strong female characters. What was the impetus for you to create characters that were so unlike women in Asian fiction?

My characters are certainly not unlike real urban Indian women, because I have modelled them around women I know. Myself, to begin with. I was lucky to grow up in Mumbai, and my parents gave me the freedom to live my life and explore the world as I chose to. I may have made mistakes, but now I believe they were not mistakes but life experiences that have enriched me. I had independent, educated, strong women around me while growing up who influenced my thinking and ideologies.

I think Asian fiction got into a stereotype of writing about the passive woman or the immigrant woman experience where she who goes to a foreign land and then has to deal with a husband she doesn’t know in a country, usually the West she cannot relate to. Or it would be historical fiction, dealing with the Raj or the partition and fighting for freedom. But hasn’t that changed now? There are writers who write about life in modern India but perhaps their books have not yet reached the western markets.

Q. What would you say has become a typical feature of Asian fiction? How can writers go beyond this and still be relevant to readers?

In my belief, the books we read in the West, written by Asians still cater to the Western point of view. There are several novels on the Asian Diaspora, missing the homeland etc. Or talking about the second generation immigrants and their struggle to cope with the duality of their lives. All these are perfectly valid and interesting to read, but there’s so much of it now that it looks like we’ve read them all. For example, I started to read The Suitable Boy by Vikram Seth last month, and found that it was quite stereotypical and I couldn’t bring myself to continue. But then I realised, when he wrote it, it was probably the first of its kind dealing with those issues and themes, and therefore a great success. There have been so many that followed those themes that it took away the charm from his book for me. I wish I had read it earlier, when the concepts were relatively new.

In spite of what is considered typical features of Asian fiction, if it is written well and with a different point of view or interesting angle, I think readers will still enjoy it. There is more to South Asia than arranged marriages, big weddings, poverty, religion and dominance of women!

Q. What did you hope that readers would take away from reading your book?

I hope that readers will find the book honest and relate to it. One doesn’t have to have experienced India to relate to the human aspects of the story:  friendship, love and sexuality. At the same time, I wanted to project India, or rather more specifically Mumbai and Calcutta in a more up-to-date version. I want readers to have a glimpse of what is was like to be an independent woman in Mumbai in the 90’s.

Q. As writers do you think we have a sense of responsibility to tackle the big issues, such as you have? And how can we do this without appearing to preach?

Absolutely. As writers, we do have a sense of responsibility to tackle big issues. But it doesn’t have to be big issues all the time. A writer must write about what one believes in. When I decided to write the issues of woman empowerment, sexuality etc I realised that I needed my characters to be human, with flaws as well as strengths. Also, I consciously modelled the male characters with their strengths and weaknesses too. I didn’t work too hard on trying to explain the big issues, but instead hoped to tell it through simple language and a simple plot.

Q. Love and friendship are major themes that run through the novel. Which books or authors have influenced your work?

Q. Tell us about how you found a publisher and what it was like working with an independent press? Would you recommend it?

After finishing writing the book began the next phase: looking for an agent. It was disheartening to keep getting rejection letters, but I kept telling myself that at least I had reached a point where I could receive those letters. I had actually a complete manuscript which in itself was a huge achievement. I kept writing short stories and they were getting published quite regularly. One of the stories, Growing Tomatoes, was published in Planet – The Welsh Internationalist. The best thing that happened with regard to social media was that someone read it and commented on it in a short story group on Facebook. Susie Wild, my editor, from Parthian read it and asked me if I had a novel or a collection of stories ready. I sent her my ms and Parthian took me on.

This is my first experience with having a book published, so I don’t have anything to compare it with. But it has been a great experience. I still don’t have an agent, so Susie and the Parthian team supported me as best as they could, not just with the book, but with the promotion and marketing too. Independent presses are important to the book trade, and I found a personal touch with Parthian for which I am grateful. I think independent presses are brave to publish books that are a bit different, they look out for new authors and are not dictated by the demands of financial gains. That’s what I think, anyway.

Q. Finally what advice would you give to writers who want to write a book about the realities of modern life.

I would say write what you know about, or on a subject one is interested in. But who am I to say anything? Just be truthful about what you write and enjoy writing about it. It will show through in the end. Don’t be afraid to write about controversial themes, worrying what will family and friends think about it. But at the same time, be sensitive not to hurt anyone. And there is no replacement for hard work, don’t be in a rush to submit your manuscript. Don’t be afraid of rewriting. And good luck!

Susmita Bhattacharya is from Mumbai. She received an MA in Creative Writing from Cardiff University in 2006 and has had many short stories and poems published in the UK and internationally. Her most recent works are included in Rarebit, Stories for Homes, Penguin Unplugged, Eleven Eleven Journal and Litro. The Normal State of Mind  is her debut novel. She lives in Plymouth with her husband, two daughters and the neighbour’s cat. She facilitates creative writing in the community and blogs at http://susmita-bhattacharya. blogspot.co.uk. She tweets at @Susmitatweets.