On Thursday, 26 November, the literati of London gathered at the Shaw Library, London School of Economics,  to meet the founders and judges and to hear the announcement of the short list for the 2016 DSC Prize for South Asian Literature.

Founded in 2010 by the mother and son duo of Surina Narula MBE and Manhad Narula, and funded by the global infrastructure company, DSC, the Prize has become the leading international award for showcasing South Asian writing to the world. With a prize of USD 50,000 ((£33,000) it is also one of the world’s richest prizes.

Chaired this year by the renowned broadcaster and author, Sir Mark Tully, the judges represented the prize’s international character.  Dennis Walder, Emeritus Professor of Literature at the Open University, represented the UK.  Karen Allman, a highly respected bookseller and literary coordinator, is from the US. Neloufer de Mel, is Senior Professor of English at the University of Colombo, Sri Lanka who has written extensively on society, culture and feminism, and Syed Manzoorul Islam, is a celebrated Bangladeshi writer, translator, critic and academic. 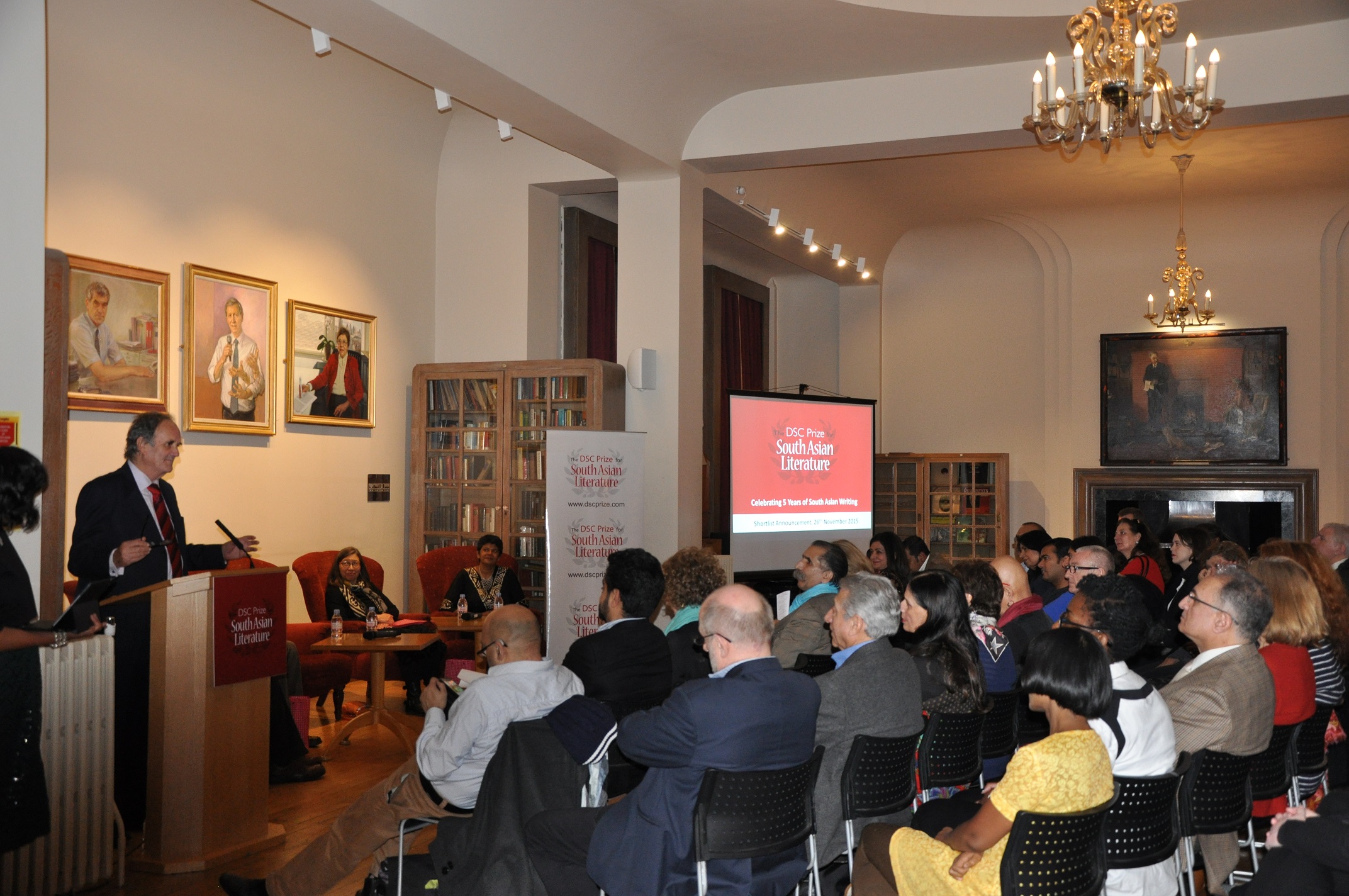 The judges were tasked with choosing five or six books from their earlier longlist which included luminary South Asian writers such as Amit Chaudhuri, Sandip Roy and Aatish Taseer.  The event was a slick, fast paced and enjoyable hour with Sir Mark prefaced his announcement by saying:

“We have had to make difficult decisions because all the books on the very varied long-list could qualify for the shortlist. Our final list still reflects the variety and vigour of South Asian fiction writing and writing about South Asia. One of the most striking features of the list is the quality of writing. The novels are also remarkable for their realism and for the way they convey atmosphere.”

For the first time in the prize’s 6 year history, the shortlist was largely centred on authors originally from one country, India, (we include the book about Kashmir in our definition of India):

Showcasing a wide array of topics and styles, each of these books breaks from the more traditional topics that characterises so much of the South Asian genre.  Each is a stand out read.

Family Life is the moving story of one family’s love, duty, of being outsiders and coming to grips with what life sends them after they move to America.

Anuradha Roy’s novel exposes the horror of violence against women and children in India, but also of the resilience of those caught up in it.

K.R. Meera’s unique tale of India’s first female executioner, Chetna, who follows her family vocation in a battle to break from shackles of her culture, is unsettling yet remarkable. Hang Woman was originally written in Malayalam and translated by J. Devika.

Those who have read Mirza Waheed’s first novel, The Collaborator, will know his talent for exposing the reality of life in his war torn home in the 90’s.  The Book of Gold Leaves returns to that place with a poetic story of love amidst the conflict.

In The Lives of Others, Neel Mukherjee travels back to Calcutta in the late 60’s, where he examines the political extremism of the time and how it unravels a family.

Finally, Raj Kamal Jha paints an explosive picture of modern Delhi through overlapping tales of three lives. Like many of its shortlist companions, this novel is at times disturbing, a story of violence, sex and poverty in the new India.

Threads of conflict (both political and personal), violence, feminism, tragedy, and the frenetic, challenging pace of life are woven through all of these books and unite them in painting a picture of the reality of India.

The judges of the 2016 DSC Prize have a little over six weeks to come to a decision on a winner.  One of the judges told me how “civilised” the discussions have been so far.  I imagine there will be more heated conversations during their next deliberations.  I’m looking forward to being at the Galle Festival on 16 January to celebrate with the winner.

The 2016 DSC Prize for South Asian Literature will be awarded at the Galle Festival, Sri Lanka on 16 January by the Prime Minister of Sri Lanka.  The Asian Reader will be at the festival reporting on the programme.