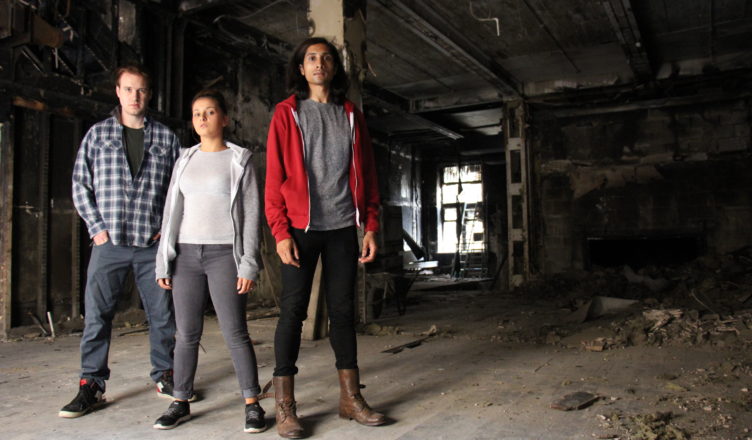 A new play exploring cultural identity through the lens of a post-apocalyptic world opens at Freedom Studios next week.

Tajinder Singh Hayer’s latest work, North Country follows the journey of three young people as they deal with the aftermath of a bloody plague. As the trio embark on rebuilding their lives over a forty year period, they must decide how best to reshape their identities and their communities.

Hayer, a creative writing lecturer at Lancaster University and sci-fi buff said he was keen to bring elements of British Asian culture, science fiction and theatre together on stage in a way that hadn’t been done before.

“One of the reasons that I wrote a post-apocalyptic piece, is because the subgenre is absolutely focussed on issues that are central to migrant and second generation narratives; it’s about a journey from an old country to a new country. Characters are constantly making decisions about the customs they want to preserve, reshape, revive or leave behind – about the society they want to make. These are issues that my grandparent, my parents, myself and my children have been grappling with and will continue to grapple for years to come. “

Having attended sci-fi conventions over the past few years, Hayer noticed he was only one of very few brown people in the room. While he says things are changing on that front, he felt it was critical for him, as a British Asian writer to enter the space. ‘There’s an appetite for diversity in science fiction, but also I think it’s absolutely necessary because if you think about science fiction, a lot of the time it’s conceived with imaginary futures and if you don’t have writers from different backgrounds and characters from different backgrounds appearing in those futures then that’s worrying because they’re being written out.’

Bradford born and bred in Bradford, Hayer says it was only natural for him to set his play in the place he knows best. Having lived in the city for thirty years, he says, it has always informed most of his writing. The post-industrial legacy of Bradford, with its manufacturing industry in perpetual decline and deserted factories made a befitting home for an imagined post-apocalyptic world. The play will be performed in a disused Marks and Spencer building in the centre of town.

For Hayer in post-Brexit Britain where the country is questioning its identity outside of Europe and asking itself ‘What is thing called Britain?’ the play feels very relevant and real. It allowed him to interrogate aspects of British culture that can be problematic but aren’t often put under the microscope.

North Country was initially developed by Hayer alone. It was later performed at Arcola theatre for a rehearsed reading during their new writing festival where it was directed and later picked up by Alex Chisholm, co-artistic director at Freedom. The pair worked together previously on Hayer’s earlier work, the West Yorkshire Playhouse production of Mela.

Hayer is passionate about writers breaking out from the mould, and embracing new forms and genres to tell stories but he’s equally keen for theatre-makers to move away from tried and tested approaches. While he isn’t dismissive of British Asian Bollywood theatre, he makes a valid point that diversity should be about having a diverse approach, not just a diverse cultural make-up. He believes that this risk taking, will ultimately lead to interesting narratives coming to the fore.

His advice: ‘If you’re commissioning something for a British Asian audience be aware that there are different audiences within that audience, and you might be, in trying to go for breadth, you might actually end up with something that isn’t reaching as many people as it could be, or perhaps ignoring certain perspectives.’

North Country may just be the breakthrough moment necessary for commissioners to realise that British Asian theatre is capable of moving beyond the tropes of Bollywood and pave the way for bold new writing to take centre stage.