Skip to content
Q. What inspired you to write Blood? Where did the story come from?
The initial commission from Tamasha Theatre was an adaptation of Lorca’s classic Blood Wedding to a contemporary setting. I knew, early on, that adapting 1930’s rural spain to 21st century inner city UK, was going to involve a massive shift, a change of form, as the lifestyles in each setting  are totally different. I decided to bring the individual love story to the fore, as the sense of community in a rural setting, as portrayed in Lorca’s Blood Wedding, isn’t as strong in the inner city… we are more fluid in our identities today, so, hence, the love story of these young inner city kids naturally became the focus.
Q. How long did the play take you to write and how long did the development process take?
I had the commission for a while, and once I took the essential decision above and created my characters Caneze and Sully, I left it for a while whilst I got on with other work… I wrote first drafts of two other plays and a treatment for a film. Then the  2011 riots happened, and I was frustrated as to how young inner city, particularly, young people-of-colour were being portrayed in the media. I was also tired of the extremist narratives being perpetuated around young Muslim youth, as opposed to young people just generally feeling disaffected. I know a fair few young people from this community, my community, and although frustrated, at times, not one of them wants to commit any big acts of extremist violence, I wanted to tell a more real story as opposed to the single story that is being perpetuated. Caneze and Sully sprung to life as as quite ordinary, extraordinary in their ordinary-ness, struggling against some real  deep seated issues and showing great courage in the face of such odds. Luckily, for me Tamasha liked the first draft I sent and we continued from there . 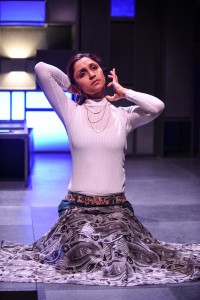 Q. What did you learn about writing for the stage during this process?
I learnt loads about writing for stage. To use the old adage: ‘it is only by doing we learn’, and this was true for me. Coming from a Performance Poetry background I learnt most about character and characters driving the narrative in stage plays.
Q. What’s it like working with a director? And how did your director help you to develop the play ready for an audience?
My director Esther Richardson was also the dramaturg of the piece so we established a good relationship over the last two years. Esther had a genuine respect and sensitivity to the world I was trying to create and I had a big respect for her skill base and her knowledge in how to structure a story and ultimately how to mount a production. She is incredibly experienced, knows the industry and I have  learnt loads working with her. 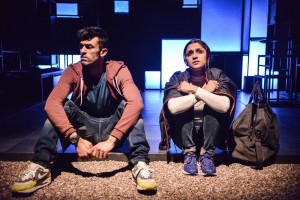 Q. Having worked on the play for such a long time and seen it at every stage of its development – are you ready to let go and see it again through an audiences eyes?
You have to let it go, once it gets into the rehearsal room, other people bring their own views and artistry to it and, if people respect your vision, then it’s an honour to watch others work their magic on what then becomes a collective vision. I have loved every minute of working with such skilled practitioners on BLOOD.
Q. Are you a fan of reviews? What about critics?
Thankfully, due to the internet we can access a diverse range of reviewers and bloggers, this is essential, as some of the mainstream media reviewers don’t have the reference points for regional and marginal work. I don’t mind reviews but I want a broad range of reviewers, male, female, northern- southern, working class, people-of-colour, etc. to review the work. The internet allows this and I have been fortunate to have had this for BLOOD. On the whole the reviews have been  great, the production has been embraced, and people seemed to have understood what I was trying to do, which is a big sigh of relief!
Q. What do you think will delight and surprise audiences when they come to watch Blood?
Seeing young brown kids being complex, enigmatic and courageous, as they really are, and relating to that from references in their own experience, I would hope.
Q. What’s exciting about working in theatre today and what are the challenges of bringing an ordinary story to stage?
I have always loved theatre, I love watching plays, but if I may change the question to ‘what is actually concerning about working in the theatre today?’ is the cuts to the arts and the industry. It is only through strong subsidised theatres that new work develops and happens. I have just about snuck in and I, along with many others, are concerned that theatres will not take the risks required to continue to nurture new and exciting voices. It is a very worrying time.
Q. What are you working on the moment? Tell us about your most recent commissions?
I am currently working on a response to the novel by Albert Camus’ The Outsiders’  set in 1940’s Colonial Algeria, also a couple of other projects so quite busy for now!
Emteaz Hussain will be appearing at Leicester Writes to discuss her play, Blood on Sunday 28 June. Blood is touring until 27 June, with its final performance at Curve Leicester.