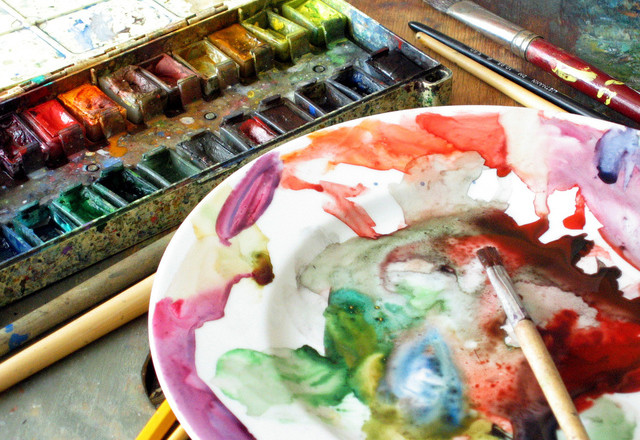 Amma was ritualistically watering her plants, which included fighting with pigeons and making small talk with squirrels. The rodent droppings never bothered her but she would get colossally upset with bird shit. I think it was probably the unusual mixture of white and green or maybe it was just the quantity. Watering a plant was interspersed with a steady dialog; with her tonal changes I could make out the identity of the species she was having the conversation with. She had now reached the chrysanthemums which were bang in the middle of the balcony, a few more plants and she would breach my space.
“All this is happening because of that painting.”
This tone, very familiar, directed at her own species. I took a sip of chai and ignored it.
“That painting, it’s the reason for your…” , she refused to say the word.
And this time I could feel her eyes on me. It was a topic that had exhausted the house these past few months. I had nothing more to say. I ignored the eyes.
“Right now, you have to take it down, right now. If only the two of you had listened to me, then all this would never have happened.”
This was a new line of attack, well not attack; more like a tactic. It goaded me enough to ask, “Amma, what are you talking about? And what does a painting have to do with anything.”
She had stopped watering the plants, this was not a good sign.
“You know, your Panna kaka had it in his house and see what happened to him. I never wanted anyone to see that painting, never wanted to give it to anyone, but he never listened.”
One of Amma’s many talents. Mostly landscapes, animals and portraits, re-created using charcoal, crayons or water colors. Mom always copied these from various outdoor magazines and photographs. She had never ever created something original. Over the years most of our close relatives had managed to get my mom to sketch their children or a scenic postcard they liked.

Unlike her other siblings, Panna kaka had always encouraged my mom, he always pitched in for her expensive oil and acrylic paints, brushes and had even given her first easel.
“When he asked I should have refused to give it, he always said that painting was his favorite, yet it ruined him.”
“Amma, Ma, please…”, I hated having my Sunday morning tea ritual being interrupted, more so with a topic where she could display her full range of soap operatic emotions.
“He used to tell everyone who visited his house, ‘Look how beautiful it is, done by our very own Suchi,’ and just five years later he died of a heart-attack, forty-two, he was just forty-two years old. Poor Panna, he would have made a great parent.”
“And the fact that he could finish a quarter of Old Monk in about ten minutes had nothing to do with it, I suppose.” I mumbled to myself.
Panna kaka, he was actually my mama but the name had stuck, the black sheep among our clan, a chef among the various engineers and doctors. ‘He cooks’, an expression they used often enough while referring to him, bearing their collective disappointment.
“He started drinking just after that painting was moved to his house…”
This was a lie, he had always enjoyed a drink, in fact all the engineers and doctors did too. And unlike them he never shouted or turned violent. A jovial bachelor, he was a favorite of the clan’s brood. Like a genie he fulfilled our various desires, English movies, road-side food and the occasional road trip to nowhere. No request small or big went unfulfilled. And now I felt bad about making that Old Monk statement.
“If only he had taken that painting down, he would never have lost his job and things would have sorted out between him and…”
Legend had it that Chef Prakash had walked in drunk into the kitchens of the Bombay Taj Mahal Palace(Panna Kaka did work there as a sous-chef). Sozzled as he was, he had still managed to cook his signature Mutton Biryani, taken it to the GM for a taste, waited for him to have a spoon and then emptied the accompanying bowl of boondi raita on the Sales Manager’s head and completed the course with a right hook. All this in the midst of a team meeting. The GM still said that it was the best biryani he had ever had.
‘Not work related problem, woman related problem’, my older and wiser sister had enlightened me. The cooking had stopped, not the drinking.

“I should have thrown away that awful painting at that time, but who listens to me, and especially in this house. It has ruined every house it has been in. Maalu, is even worse than you’ll, she always treats me like I am the younger one, never listens. ”
Though she was two years younger than Amma, Maalu akka (Malakka) had gotten married much earlier than my mom, 7 years earlier. Unlike Panna kaka, Malakka, mom’s younger sister was a bit uptight. Among other things, she always compared her children with those of her siblings and never failed to offer advice on how they should behave. My sister and I were frequently referred to, while she was imparting these pearls of wisdom to the clan.
“You know I was supposed to get married to Ramesh. Thank god I married your father.” Amma’s storytelling skills as always were derived from the soaps she devoured, peppered with unnecessary plot twists.
But any reference to Malakka and this story had to pop up. Rich and successful businessman, the dashing Ramesh had been invited to woo my mother but had taken one look at the gorgeous Mala and forgotten all about her.
“The painting must have been hanging in the room at that time”, I offered solace.
“No, no, I hadn’t even started painting properly in those days”, as always sarcasm was lost on her.
“Now. You listen to me. This is a serious matter.”
“I’m listening Ma, you were saying, the painting moved to Malakka’s house.”

Ramesh and Mala did make the picture perfect couple, and their mated perfection was strikingly evident in Nidhi and Nikhil. Both Ananya and I idolized Nidhi for completely different reasons. Nikhil on the other hand was an enigma to me, as children, while we looked to escape outdoors he would be happy and content in his imprisonment. ‘Why can’t you be more like Nikhil’ was a statement I would constantly hear as I was growing up. For the life of me I could never understand what was interesting about books without pictures. I hated him.

“You remember when Nidhi announced about her….”
Nidhi, being Nidhi had nonchalantly announced her big decision at a family gathering, a double whammy, no marriage-no kids. The abortion that Nidhi eventually had, changed the equations between Amma and Malakka.
“Ma, Nidhi is the most successful person I know. She runs her own company, earns a ton of money, she and Varun are perfectly happy roaming around the world with no excess baggage. So, there goes your painting-causing bad luck theory, I can definitely say that the painting had no effect on her. Ask Ananya if you don’t believe me.”
Ananya and I both envied Nidhi’s freedom and success, but not her lack of ties or tact.
“I’m sure she’s happy, Nidhi can do what she wants. I was just saying…”
“Ma, can we please drop it, my chai’s almost over…”
“And then, poor Nikhil…”, Amma, could always continue a one-sided monologue in a two person conversation.
I had gotten over my childhood hangups with Nikhil, we had improved to a kind of close friendship. 4 years back, on his way to Pune, a blown tyre, he had lost his wife and their unborn child. He had survived, managed to get his life back in place and had already met someone.
“Amma, Nikhil is fine now, these things happen.”
“You take that painting down and then call her. I know she will listen, just speak to her…”
“Enough! Ma, I have told you, I don’t want to talk about it. It’s done. It’s over. We are getting a divorce and that’s that”, I stood up, my chai was over and I needed a re-fill.

We had informed my parents a month ago, Papa had accepted it calmly, Amma still had questions. I knew that the explanations we had given were flimsy. We had both agreed that this was the easier, safer option. We had both wanted kids. Within 2 years Kritika was pregnant, in the 10th week she had a miscarriage. Devastating, but it happens. We accepted it and moved on. Within a year she was pregnant again. This time we took all the precautions, temples visited, poojas performed and even the occasional swami bribed. The second time we lost the baby, we lost our marriage.
“I sketched it after I lost my baby… ”
“What?”
“When you were 3 years old, I was ‘with baby’ again, your father and I, we’ve always wanted one more, there were some complications and I had to get an abortion. Ananya and you both stayed a Malu’s house. Remember? I was very depressed at that time. That’s when I made the charcoal sketch. It was of your… ”

Slightly numb, I walked into my room, and reached for the ‘cursed’ painting. A charcoal sketch of a baby, a weeping baby. I looked closer, there was a familiarity to it, an amalgamation of Ananya and me. Hanging in my room, the one and only, an original Suchitra.

Praveen Aldangadi lives and writes in Bangalore and longs for Mumbai. Ad-man, filmmaker, web programmer, corporate communication slave. He rejects all the labels that have been conferred on him. His one secret desire is to write cheesy pot-boiler scripts for Bollywood. Praveen is a community member of Bangalore Writers Workshop, a unique, effective, and interactive method of bringing a group of writers together and allowing them to study the craft of writing while simultaneously receiving constructive feedback on their own work.