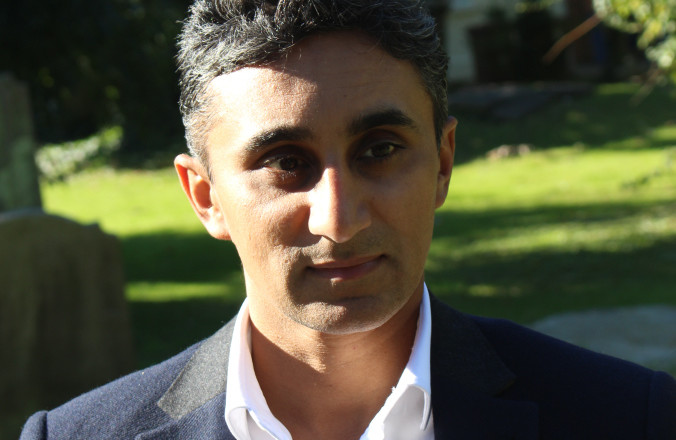 What came first the elephant or Inspector Chopra?

You could say Ganesha, the baby elephant in the series, gatecrashed the party. After living in India for 10 years I wanted to write a novel that took readers on a journey to the heart of the subcontinent – and I wanted the lead character, Inspector Chopra, to be quintessentially Indian – honest, upstanding and concerned about the social inequalities he sees in his country. But almost from the very beginning Ganesha was in the back of my mind demanding to be included – mainly because I adore elephants. They are magnificent and intelligent creatures, and I knew that a baby elephant would strike a chord with readers. I give plenty of time to Ganesha in each novel – he is not a supporting cast member but a genuine partner to Inspector Chopra!

Tell us about the trip you took to India which inspired this novel?

I first went to India aged 23 to work with a hotel chain based in Mumbai. You could say this book was born on my first day there. I remember walking out from Bombay airport and the first thing I saw was a group of lepers and beggars milling around the taxi rank. At the first traffic junction we stopped at there was a thumping on the window. I turned to see a tall well-built man in a sari. My first eunuch. I turned back to the road and there, lumbering through the traffic, was an enormous grey Indian elephant! This surreal sight stuck with me and eventually became a part of the novel I wrote when I returned to England ten years later. During my time in India I saw firsthand the effects of globalisation which brought both good and bad to the country. Inspector Chopra, like many Indians, is nostalgic for the old India, its traditions and history. But old India is also poverty, caste, prejudice, and religion impacting on all aspects of life. New India is skyscrapers, call centres and shopping malls. This inherent conflict provides a dynamic backdrop to my series.

Tell us more about your current day job and how that inspires your writing.

I am lucky to work at University College London’s Department of Security and Crime Science where I manage research projects. This means I am surrounded by world leading scientists working on ways of preventing crime and detecting criminals. For instance I have access to forensic scientists, people working on gang crime, gun crime, drug crime. I’m even lucky enough to work with a former Indian policewoman. If I need inspiration or authenticity in my writing I just have to ask a friend!

When did you decide to write? And how do you fit it in alongside your other commitments?

I wrote my first novel aged 17. It was terrible, but at the time I thought it would make me a star. How wrong I was! I wrote half a dozen novels after that, over a 20 year period, and it wasn’t until The Unexpected Inheritance of Inspector Chopra that I was actually published. Personally, I don’t believe it is difficult to find time to write if you truly enjoy it. I have a full time job, but I still write every day. I am an insomniac so getting up first thing before going to work and cranking out 1000 words isn’t difficult. I spend two hours on the train each day so that’s where I do a lot of plot writing and editing. I also like writing on the cricket field!

Did you always know you were going to write a ‘crime’ novel?

Detective fiction is my favourite genre, so, yes, I always had it in mind to write a crime novel. For me a great crime series begins with a memorable detective and then, over time, turns him – or her – into someone we become intimately familiar with. We pick up the next book in the series and instantly become enmeshed in their world, in their lives. I wanted to create a detective novel where the reader feels that same affinity for the lead character – or characters in my case – Inspector Chopra and his partner in solving crimes, the baby elephant named Ganesha, who turns up one day on Chopra’s doorstep with very little explanation for his presence.

When you were writing were you aware of how strong and refreshingly unique your concept was?

I appreciate the compliment! For those who read a lot of crime fiction it’s clear that the genre is crowded – it’s difficult to think of something new. I thought it would be different to include an elephant as a sidekick in a crime story. On a purely practical level elephants possess all the qualities of the best detectives. They’re highly intelligent, and have those amazing memories – yes, that’s not a myth. They also have a great range of emotions, which is important because a large part of the humour and charm in my series springs from the dynamic between Inspector Chopra, this rigid ex-policeman, and the baby elephant he is effectively forced to adopt.

What would you say were the best resources available to you while you were developing your writing skills?

Where research is concerned the old cliché ‘write what you know’ is the best advice I can give any aspiring writer. When you write what you know it’s like getting inside a familiar car. You can put your foot on the pedal and just go whizzing along. It was this way with me with The Unexpected Inheritance of Inspector Chopra. Many of the places and situations are based on personal experience. Many of the characters are based on friends. For areas where memory and personal experience isn’t enough I think the Internet is now the author’s best friend. The key is to learn how to be a savvy Internet researcher. That takes practise.

What was your biggest challenge writing your first novel? And how did you strike that balance between writing about dark elements with lighter, comical moments?

Trying to get the balance right between humour and the darkness of the crime in my novel was my biggest challenge. I didn’t want the novel to become a farce; it had to read like a crime novel. Yet, including a baby elephant in a crime novel meant I was forced to think differently. In the end I decided to make Inspector Chopra the ‘straight man’ – he is very rigid and focused on crime solving while little Ganesha brings in the comedy. Chopra’s irrepressible wife Poppy also provides light relief. My main aim with these books is to take readers on a journey with me to India, to experience the mystery, charm, colour and history of India but also to understand what modern India is really like. It has been incredibly heartwarming to me to see so many people writing to me after reading the book to tell me how it brings back to them the India they have visited or ‘inherited’ from their parents and grandparents. Others enthuse about one day going to the ‘exotic’ subcontinent.

How did you go about getting your first novel published? What can you tell us about your four-book deal? Have you written the others in the series?

I sent this novel to just a few agents and was lucky when Euan Thorneycroft of A.M.Heath, one of the country’s top literary agencies, wrote back offering to represent me. He helped me tidy up the manuscript then he submitted it to various publishers. Again, I was fortunate that an experienced editor at Hodder – one of the world’s biggest publishers – loved the book. That editor – Ruth Tross – convinced Hodder to offer me a four-book deal.

I have just completed the draft for the second in the series, The Perplexing Theft of the Jewel in the Crown, which is about the theft of the world’s most famous diamond – the Koh-i-noor, originally mined in India and handed to Queen Victoria during the days of the Raj. The Koh-i-noor is now part of the British Crown Jewels. In the novel the Crown Jewels have been brought to India for a special exhibition. A daring robbery sees the Koh-i-noor stolen and Chopra and Ganesha called in to try and recover the great diamond.

After that Chopra and Ganesha will be on the trail of a kidnapped Bollywood star, and then in the fourth episode they will be travelling outside of Mumbai to Chopra’s native village in Punjab, North India, to try to unravel the mystery of Ganesha’s origins and the disappearance of Chopra’s Uncle Bansi.

Finally, what are your writing goals for 2016?

On 1st Jan 2016 the paperback of The Unexpected Inheritance of Inspector Chopra is out – it has been named as a Waterstones book club selection, which is great! Then the second novel The Perplexing Theft of the Jewel in the Crown is out in the summer and this will mean another round of publicity, which I actually quite enjoy. In the second half of the year I must complete the third novel in the series. So, a busy year ahead!