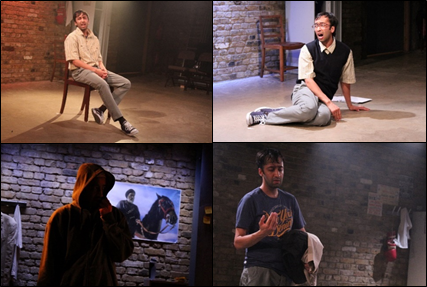 Following a stellar reception at the biennial Shubbak festival, politically provocative play Love, Bombs & Apples embarks on a tour of the UK this summer. Comic and poignant, Love, Bombs & Apples is the latest play from award winning playwright Hassan Abdulrazzak (Baghdad Wedding, The Prophet). Using comedy as a vehicle to bravely tackle problems facing the Arab, Jewish and Muslim communities across the world, the one-man stand up show draws attention to social issues. The production features four vignettes detailing the lives of four different men with four individual struggles.

The stories are told from the perspective of unrelated characters;

Scene 1, Love in the time of Barriers, teaches the audience about life under occupation for the average Palestinian. Emad is a Palestinian actor playing Hamlet at AlKasba theatre. On the opening night, he meets a beautiful English girl. But he can’t take her to his parents’ nor his friends’. In desperation to court her, he takes her to the security barrier, thinking it will be quiet as no one goes there at night. But that’s when the couple come under the search lights of Israeli soldiers…

Scene 2, Level 42 tells the story of a British Muslim jailed under suspicion of terrorism. Sajid is a Pakistani born aspiring writer. He pens what he thinks will be the definitive post 9/11 novel which he sends to all the publishers and critics in Britain. But when the police arrive at his home with their sniffer dogs he begins to realise that not everyone is convinced his novel is a work of fiction.

Scene 3, The Apple features a disenfranchised youth tempted by IS; A Bradford youth is in love with the Mac store at Westfield. His object of desire is the iPhone yet he suspects that Westfield was built to pacify Asian youth like himself, stopping him and others from going over to Syria for jihad. But doesn’t the iPhone have a lot in common with ISIS?

The final scene, Landing Strip presents a Jew torn between his liberal girlfriend and Zionist father. Isaac is in love with Sarah but things are going sour between them. She is a pro-Palestinian activist and his father fights tooth and nail for Israel. Tonight, Isaac must decide which side he is on.

While the themes visited in Love, Bombs & Apples are diverse, the stories are unified by Abdulrazzak’s deeply personal method of storytelling, humorous approach and political commentary. Set against the backdrop of worldwide, political instability, with the looming threat of civil unrest, this one-man play expertly highlights the problems in today’s global and multicultural landscape.

Boldly taking on some of the world’s most notoriously contentious issues in the news today, Abdulrazzak successfully humanises the very real situations faced by indigenous and diasporic Arab, Muslim and Jewish communities.

Abdulrazzak is of Iraqi origin, born in Prague and now living in London, and draws from his own experiences. Abdulrazzak’s first play Baghdad Wedding was first staged at Soho Theatre in 2007, before touring the world and being broadcast on BBC Radio. Commenting on his latest venture, Hassan Abdulrazzak says:

“Love Bombs & Apples was born from a love of short story writing.  There is a satisfyingly concentrated punch to a short story that a novel cannot replicate. I wanted to take on big subjects through the medium of comedy, which I feel the short story format allows you to do very well.  The show is very theatrical, and driven by several political messages, but at the same time has some elements of stand up. I wanted to create interesting stories that will engage the audience, make them laugh and think about the world in a slightly different way than they did before entering the theatre.”

Bringing the entertaining and clever script to life, lead actor Asif Khan (The Nutcracker, The Book) shifts seamlessly between the individual stories, captivating his audience by deftly assuming each character with surprising ease. Khan is as believable as an Arab in Jerusalem, as he is Jewish man in New York. Designed by Mila Sanders, the stage layout is kept to a bare minimum, making use of only a handful of props. The minimalist set design allows Khan’s performance to stand out, leaving no room for distraction.

Speaking on his role, Khan says: ““There are many challenges such as fully embodying physically and vocally each of the four characters I’m playing. But I think the most challenging thing with this piece in particular is stamina – having the stamina to keep the audience fully engaged for 90 minutes, with no interval! But it worked out last year and so we can take confidence from that.”

Written by Hassan Abdulrazzak, directed by Rosamunde Hutt, produced by AIK Productions and Turtle Key Arts, and performed entirely by Asif Khan, Love, Bombs & Apples is touring the UK this summer, kicking off with shows in Newcastle in May, before finishing in Oldham in July.