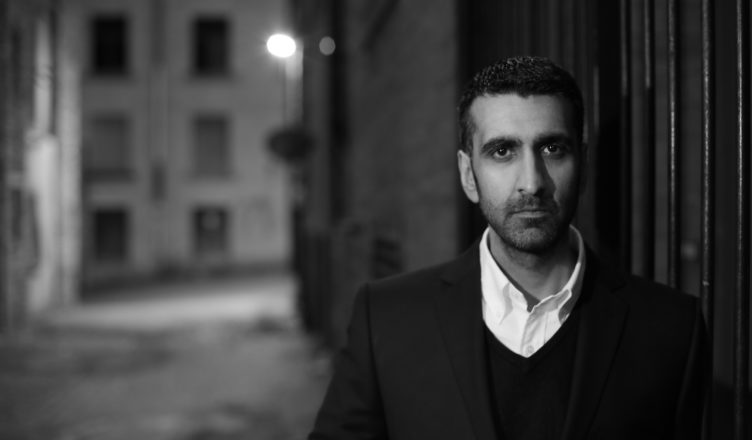 How important was it for you to set your series in Bradford?

It was important to set the series in Bradford, my home town. It is a city with amazing history – a hundred years ago the richest city in Europe. It is a city steeped in glory from the industrial boom days but over the last fifty years has fallen into a bleak decline from which it struggles to recover but recover it will and is doing. A crime thriller which utilises the darkness within a city (and all cities have areas of darkness) adds to the atmosphere and tension of such books. Had I set this novel in Bronte County (the most picturesque part of Bradford) it would not have had the impact or Gotham-esque feel which I wanted to create.

Where did the inspiration for your character, Inspector Harry Virdee come from?

Harry Virdee has been forming in my mind over the past ten years. We do not have such a character in literature (or on screen) who represents a British Asian fiercely patriotic to his city and country and who will always put tradition and cultural melodrama secondary to the British values of tolerance, democracy and acceptance. There are no clichés or caricatures in his psyche. I find that characters from an Asian background represented in literature or screen fall into stereotypes and I wanted a “Luther” or “Bauer” (from 24) type character who would be compelling and to be honest bring the phrase “cool”, “dangerous” and “edgy” with him. Harry is an important character as I feel he is ground breaking as is his wife Saima who as a British Muslim woman is equally fierce albeit channels this into her inter-faith relationship with Harry and protects him from self-destructing. She is his balance.

There’s lots of wonderful layers and complexity in the novel about race, religion and culture, right from Harry and Saima’s interfaith marriage through to the riots that threaten to destroy everything. Did you always know that you wanted to write this sort of crime fiction?

I wanted to write a multi-layered, multi-faceted thriller where three major storylines which seem standalone and eventually merge in a dramatic and bombastic finale. This layers the tension, never allows the reader to “get comfortable” with where the story is heading and most importantly allows me to end each chapter on a knife-edge. There are strong themes of race, identity and to a lesser extent religion and these are all important topics for the times we live in – more so identity and what it means to be “British”. I find the media often narrows the narrative with regards to Muslim women which is why I made Saima fiercely patriotic – her decision to marry Harry was not shackled by culture or tradition. If we accept that being British is about tolerance and democracy then we, as British Asians needs to embrace those values and ask ourselves to apply them to our own lives. Inter-faith tensions and hyperbole must give way to dialogue and understanding and this is what Harry and Saima attempt to do. The character of Lucas Dwight, the former leader of the BNP and recently released from prison was hugely enjoyable to write as his character was based on three people I had met over the past ten years, all of whom were sympathetic to the BNP yet all of whom I saw change and soften. The major themes of the characters within this book are change, subverting stereotypes and obviously drama.

How many drafts did you write before you were happy with it?

This storyline has been building in my head for ten years. I tried writing it four times between 2006 and 2010 and couldn’t get it right. In 2015 after finishing another novel (Fields of Blood) I turned my attention back to Streets of Darkness. I wrote it within a month, edited it over another month and it was finally done. So two drafts for this particular version.

Tell us more about how you find the time to write. Have you written the next one? The one after that?

It is hard to find the time to write when life is so busy. I find writing between 22:00 and 03:00 the best time. I write with very loud music blaring in my headphones and in a room with low lighting adding to the atmosphere of the thriller-writing process. I have finished book two in the Harry Virdee series and it is currently with my publisher for comments.

You’ve talked to us before about the challenges of breaking into publishing. What has the journey been like since you got picked up?

It has been a tough journey requiring perseverance. To land a mainstream publishing deal with Penguin Random House is rare and even rarer for an Asian thriller writer. This is the first series to feature a British Asian lead, set in England that I am aware of. Since landing the deal, it has been hugely enjoyable, networking with authors I am a fan of and taking part in media interviews. I have a great team banging the drum for Streets of Darkness and having an agent like Simon Trewin with such fantastic connections has meant I have had plenty of opportunities to publicise the novel.

Was there ever a point when you thought of giving up writing? What keeps you motivated to write?

I have had times when I thought about giving up but I was fooling myself. Writers write – I cannot help but write, it is a compulsion. My motivation is to create ground-breaking thrillers which pull readers into a world they have never seen before and there is much to explore with having an Asian heritage – storylines which nobody has ever explored in a thriller.

Congratulations on the film front. What will your involvement be? Are you excited about the prospect of bringing Inspector Harry Virdee to the screen?

Filmwave are a fantastic company. Both founders, Christian Grass and Paul Trijbits are extremely passionate about Streets of Darkness. My involvement at the moment is trying to write a pilot script with their help although I am not the commissioned writer. I am giving this a try because I wanted to and if they feel it is something I am able to do, then we will have that conversation. For me, I love trying new things when it comes to writing. For the moment, that is all I can say on the TV rights as it is very early stages but I hope to have more news on this soon.

What have you learnt about yourself through the writing and publishing process?

I have learned that working hard and having self-belief does in the end pay dividends. It took me ten years but I never believed it would not happen. With each failed 100,000 words I got better, didn’t let the disappointment beat me and kept improving. This is a lifelong journey and I feel that with each novel I write, I get sharper.

Good luck for publication day, we wish you all the best with the debut. Where do you go from here?

I have submitted the second novel to my publisher “Girl Zero” and am currently seeing what my version of the screen format looks like.

A.A. Dhand was raised in Bradford and spent his youth observing the city from behind the counter of a small convenience store. After qualifying as a pharmacist, he worked in London and travelled extensively before returning to Bradford to start his own business and begin writing. The history, diversity and darkness of the city have inspired his Harry Virdee novels.