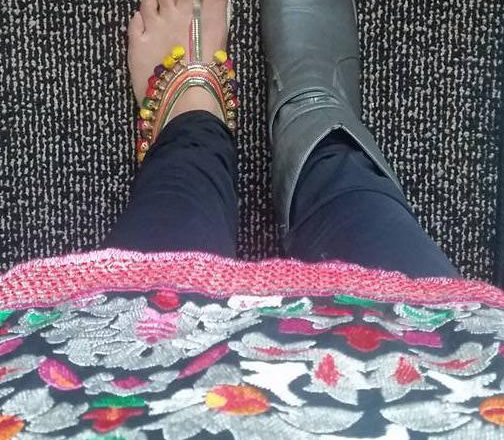 With one foot in the English rain and the other in tropical summer, I hang in between

Earlier this year, when one figure changed from five to six, our phones, so unmoved and unaffected, mutely discarded 2015. The BBC hosted a season of identity 2016, a month long series of programmes, exploring how the increasing exchange of ideas, languages, cultures and information, are shaping who we are and how we live. And of course, the question of identity lies at the heart of South Asian communities in Britain, a tale of the modern individual, searching for identification between two worlds.

Following the completion of my postgraduate studies, I booked a return flight to Lahore, Pakistan, to attend several family weddings. For three months.

Further extended by another three months.

A total of six months.

‘‘Would you consider moving to Pakistan, your second home?’’

These questions stumped me. I scrunched my eyebrows together and shook my head while munching on a seekh kebab, during an evening dinner in Birmingham, when my two friends asked me these questions.

Returning to the UK, after half a year, I only just realised I had been carrying this question ‘My home?’ with me for almost my entire life. Why didn’t I ever think about this before? Although I had visited Pakistan several times since childhood, this particular extended stay positioned me out of place, in given places.

As reported by the BBC news, an increased wave of racial comments post-Brexit had created a bitter backlash across Britain, against the Europeans and the South Asian communities.

According to a report by the National Police Chiefs Council, hate crimes after Brexit increased by 57%. The report also stated that, ‘‘these figures only take into account reports through one mechanism…so this is not an overall national figure.’’ In other words, there was now an immeasurable season of racism.

The question, ‘my home?’ just got real.

Brexit had opened Pandora’s Box of identity crisis, carrying with it questions of belonging and acceptance. How many of us would give a puzzled response? Would we reply, ‘‘I’m from the UK’’ and add, ‘‘however, I was born in Pakistan.’’ Or would we leave out the ‘however,’ and avoid this part altogether?

Well, when in Britain, the Pakistani earth is missed.  When in Pakistan, the Englishness is missing. The world left behind each time becomes an imagination in the current surroundings, visualizing both worlds to be viewed in one frame, through which an overlapping between languages, sounds, tastes, smells & visuals takes place. I feel different.

The principal theorist of hybrid identities, Homi K Bhabha, uses the terminology a ‘third space’ to describe this intermediate position. Bhabha defines hybrid identities in The Location Of Culture, as a position that is ‘neither the one, nor the other’ rather ‘something else besides,’ something that is ‘in between.’ He further states, ‘‘…to trace two original moments from which the third emerges…The process of cultural hybridity gives rise to something different, something new and unrecognisable, a new area of negotiation of meaning and representation.’’

With one foot in the English rain and the other in tropical summer, I hang in between. So when posing the question, where is home? The answer is not simple, and the pendulum swings.

The scorching summer sun of Lahore is spewing fire, and with the sound of a click, the electricity goes off and the fan spins slowly to a stop. It’s humid. I’m drenched in sweat. I secretly begin to miss the British weather, its rain. When its raindrops fall, just in time for the downpour, I shelter under my black partially broken umbrella, which flutters inside out with the wind. Worst, a weapon designed to take peoples eyes out. Forcing me to walk at an angle, it gets caught in the blustery shower, pushing the ribs to reverse & turning the world upside down. SNAP! A Mary Poppins failed!

Reaching home with soaked boots, its now time for a cup of hot steaming tea, with hands around the mug, hugging its warmth, I watch the rain getting louder on the window. Does the sun ever shine in Britain? A rather melancholic feeling and the mind goes back to the glorious sunshine of Lahore. When the electricity comes back on, the noisy ceiling fan and the rumble of the air-conditioner sound like the favourite lullaby. Lying on the bed, surrounded by the huge tastefully decorated and elegantly furnished room, with an embellished with mosaics attached bathroom, I respond contently, falling back to sleep. Is this home? Inside the spacious and luxurious bubble of Lahore? Or is home inside the small and cosy box of English decor?

Is home within the colours of Lahore, in its poetic life, in the family connections, the presence of several generations under one roof? A sense of attachment is felt. The waking up by the call of Adhan, gently swimming on the morning pleasant wind, as the author Sahar Khalifeh describes it, ‘‘like a glass of milk scented with the fragrance of flowers, drunk in the morning it brought a feeling of peace and serenity.’’ At such odds of having to wake up unwillingly by the constant sounds of the phone alarm. In which morning alarm can home be heard? Is it where the sound of the human voices blends in with the sounds of the traffic vehicles, a city full of noise, where everything speaks? Or is it where you listen to the silence softly blending in with the sound effects of the Television screens, putting you to sleep?

That welcoming smell as you get off the plane, an aura that is full of life, so soul touching that you could taste its flavours. Is that smell called home? Where the aroma of spicy curries floats across the culinary streets, the exciting whiff of fresh barbeque mixes with the scent of the earth when it heats? Or is home smelt while walking past a chip shop, wafting towards me?

Birmingham, are you called home? Walking lost in my own world on your streets, to the sight of the bull at the city centres feet? Where the German market glows like the winter midnight stars, we hear the Christmas guitars. At the height of Midland’s industrial past, the narrow boats stretch along the waterway charms, allowing the mind to wander at the tranquil canals. Is home within these serene locales? Where I have a distinctive dialect, I sound a Brummie. But, when dressed in vibrant colours of my traditional clothing, feet covered in embellished sandals and not in the leather boots, I am someone else when I speak Urdu in the Lahore bazaars. Punjabi deals with a different approach of thought and tone altogether. From one language to the next, I may sound bizarre. When in anger, emphasis is given to the English language, when feeling expressive, sounding like an Urdu poetry, and when amused, it is the Punjabi dialect that becomes the tune. Is home where the accent of my voice was born? Or is it where I question my knowledge of English, my capacity to speak it?

Ng?g? wa Thiong’o, a Kenyan writer, puts it concisely, ‘‘The choice of language and the use to which language is put, is central to a people’s definition of themselves in relation to their natural and social environment.’’

Trapped in clothes, they also become me.

And no, that doesn’t mean pairing Reeboks with a bright orange salwar kameez. Rather, a pick and mix, the final. I have never felt as feminine, as elegant, and as complete within my British Asian form as I do when I pair my High Street retro brocade midi dress, with the charm of a delicately dancing in the air duppatta from Pakistan, dangling off my left shoulder, embellished with trims and hanging tassels. The attire is then completed with a Pakistani pleated pyjama and a pair of stilettos.

Undoubtedly, as explained by the author Fred Davis in Fashion, culture and identity’, ‘‘Dress, then, comes easily to serve as a kind of visual metaphor for identity…’’ It has a ‘visual language,’ with its own ‘‘distinctive grammar, syntax, and vocabulary.’’ This seems to put across a sense of communication through clothing between the observer and the wearer. Clothing may well be the most expressive voice about the self, enabling to discover and satisfy the inner individuality.

A rather shy feeling, but, an obsessive need to feel the Englishness by wearing skinny jeans when in Lahore, signifying a freedom of choice and the independent self. Wearing the traditional Pakistani attire in Birmingham, it feels a little girlish, but, to some extent, mature, and culturally responsible. However, a sense of nervousness is felt about wearing bright colours, preferring the sophisticated blacks and browns with muted greens and blues, rather than the bright hues. Otherwise it’s like switching from the black & white television into the coloured, and you feel like one of those characters outlined in black and white in a colouring book, allowing colour to be placed over the drawing without affecting it. Is this home where I have to question the selection of my colours? Or is home where the rhythm of my soul can touch the colours of my culture?

But, I do not grieve over my contradictions; rather, I choose to use them together. As Salman Rushdie perfectly put it, ‘‘a bit of this and a bit of that is how newness enters the world.’’

Looking into two mirrors, I stand in the middle of a bridge, refusing to cross, left or right. I am in between. I am the bridge in between. In between two worlds I am the bridge. The bridge itself, a mere transportation tool, does not belong to either side, not the left, or the right. It represents a connection, brings to awareness the existence of two paths, each with its own difference, yet attached together by the bridge. But, what is under that bridge? A river?

The river, my identity, it continues to flow, always in process, always on the move, towards an ongoing route.

Let Brexit drown in that river, so that my identity may happily float.

Anam Hussain, on that road to self discovery, walking two worlds, between Birmingham & Lahore. An English graduate with further studies in Law, enjoys writing to free the mind. She loves travelling, spending time with her family, and all things fashion! With a creative eye for colour, a feel for fabrics & a style for design, she believes in the elegance in simplicity.