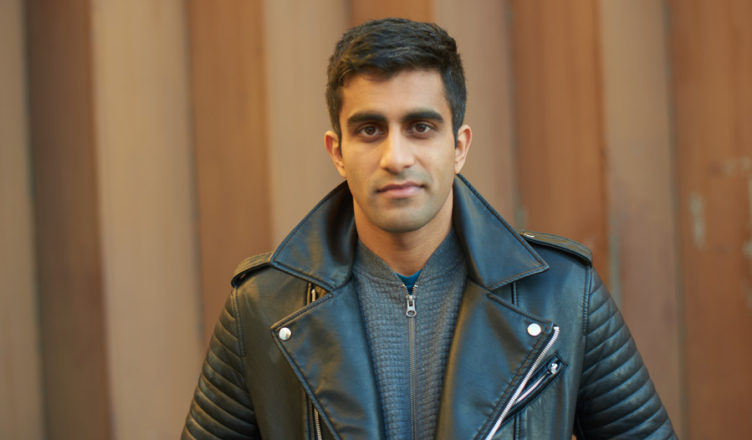 Coventry born, Bally Gill is currently playing the lead role of Romeo in the Royal Shakespeare Company’s production of Romeo and Juliet. Directed by Erica Whyman, Shakespeare’s tragic love story is set in a world very much like our own and is about a generation of young people born into violence and ripped apart by the bitter divisions of their parents. Here Bally Gill speaks to us about playing Romeo, his transition from writer to actor, and his admiration for Goodness Gracious Me’s Sanjeev Bhaskar.

Gill started out as a writer so I ask him how he made the leap into acting and how this continues to influence his artistic practise. “As a writer I wanted to write characters that I was interested in and wanted to see and had a voice for me,” he says. His time at the Belgrade Theatre was spent on writing comedies and improvisation. “It was all free-styling,” he says. The training helped him to develop his understanding of how plays work and the importance of language and it’s this perspective which continues to shape him as an actor.

I can’t help but draw a parallel to other writer-actors, Meera Syal and Sanjeev Bhaskar who wrote characters for themselves and wonder if they inspired his approach. Gill tells me he starred across Bhaskar in his first major credit, Dinner with Saddam and is a big fan. He sounds almost awe-struck: “Goodness Gracious Me was something that I just grew up watching and all my family were laughing out loud and laughing all the time because it was incredible.”

I ask him if he’s keen to follow in Bhaskar’s footsteps and he admits he would be. “I’m learning that sometimes as an actor you’re waiting for something to be created, and actually you can take the onus on yourself and create your own work.” If he does write something of his own, he says, he would be keen to do it as a British Indian man from Coventry, rather than the stereotypical roles that are often written from the outside-in. He believes that theatre is the perfect platform that can give you that chance to write and tell your own stories.

“I don’t think our voices are out there as much as they should be, or it’s not us writing those stories or being commissioned to write them.”  -Bally Gill

Working with the RSC and landing the lead role of Romeo is very much a dream come true for the rising star. For a long time, he says, he didn’t think such a thing was possible, believing that you had to be white, middle class, or an Oxford graduate to work with the company. The role does present its challenges though. As someone relatively new to Shakespeare he admits that getting to grips with the language has been tricky. “I’m not gonna lie, when we first started I just didn’t understand some of it. It’s not in my repertoire.” He says he’s constantly learning and is grateful for the supportive team around him. “It’s an incredible company, it’s so open and everyone can pitch in.”

Gill strikes me as someone who is incredibly passionate and enthusiastic– about the theatre, the RSC, young people and representation. He’s excited about what he’ll bring to the role of Romeo but also where it might lead and who it might inspire. Young people from schools across the region, including Gill’s former secondary school, are set to join the production at the Royal Shakespeare Theatre.

“There’s no limit to what we can do, so we can do whatever we want.” – Bally Gill

We talk about the lack of diversity in the arts, from our screens to the stage and Gill is optimistic. “The world is changing,” he says. “Who would have thought that an Asian actor from Coventry would be playing Romeo in 2018?”

“Slowly but surely we are kicking the doors open and breaking those barriers down and we are making people change about how they perceive those characters in those roles.” He stops here to clarify that he’s specifically talking about Shakespeare at the RSC.

“I think it’s all well and good putting diversity on the stage but it has to be filtered throughout the whole company – which is backstage, in the offices, higher up to the people making decisions – only then can we achieve true change.” He trails off to acknowledge the actors, particularly Sanjeev Bhaskar, Dev Patel and Archie Panjabi who have helped paved the way. “They’ve showed the world that British Indian people especially are writers, are actors, are directors and are artistic, and we have to keep going. It’s a constant fight.”

Bally Gill is playing the lead role in the RSC’s Romeo and Juliet, which runs til 21 September 2018.