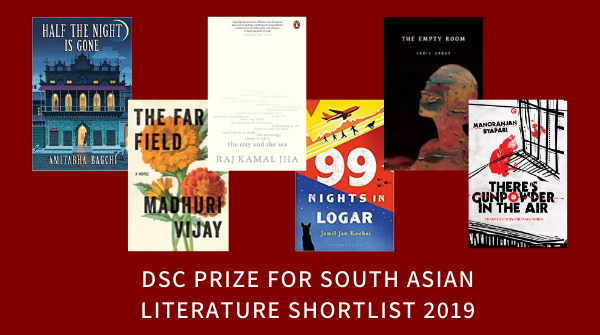 Indian writers once again dominate the shortlist for the DSC Prize for South Asian Literature 2019, which was announced earlier this month (November 6 2019).

Now in its ninth year, the DSC Prize is one of the most prestigious international literary awards specifically focused on South Asian fiction writing, and celebrates the very best writing about the lives of the people belonging to this region.

Of the six titles shortlisted this year, four authors are of Indian origin with one each of Pakistani and Afghani origin. The shortlist includes three debut novelists including two women writers, as well as a work of translation of a novel originally written in Bengali.

The six shortlisted novels contending for the DSC Prize for South Asian Literature 2019 are:

Harish Trivedi, Chair of the jury said. “What is it about writing novels that one can get it so right the very first time of asking? Three of our writers live in South Asia and three live abroad – which fact may not come as a complete surprise. There is now a South Asia beyond South Asia. Two of the six novels are set partly in New Delhi, and partly in the surrounding countryside in one case, and in the other case partly on the Baltic coast. One of the novels is set in Pakistan of the 1970s, one in Kashmir, and one in Afghanistan. The sixth is actually set in a prison and was written originally in Bengali by an author who has actually served time and used that period to learn to read and write.”

The shortlist announcement kicked off with a keynote address made by international bestselling novelist Kate Mosse who spoke about the importance and impact of women in writing and publishing in South Asia, and beyond. Several issues like the need to enhance accessibility to and reward the excellence of women writers were also highlighted.

The $25,000 DSC Prize for South Asian Literature is one of the most prestigious international literary awards specifically focused on South Asian writing. It is a unique and coveted prize and is open to authors of any ethnicity or nationality as long as the writing is about South Asia and its people.

The winner of the DSC Prize 2019 will be announced at the IME Nepal Literature Festival in Nepal.