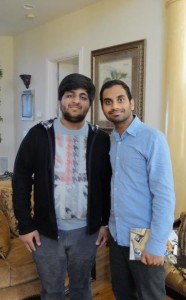 Mustafa Abubaker (pictured on the left) with actor and comedian, Aziz Ansari

Q. Please tell us a bit about yourself and how you got into writing?

I’m a freshman at High PointUniversityin North Carolinabut I live in Atlanta, Georgia. I got into writing as early as the fifth grade when my class was assigned to write a piece on 9/11. My teacher called me in during break time to tell me how great it was and even called my parents at work to tell them about it. Ever since then, I have known I had a gift. I kept writing here and there up until my freshman year in highschool when I decided to write the novel The Surrogate which I finished just before junior year.

Q. Please tell us what your book is about?

The Surrogate is a very personal piece of work to me just because I was going through a lot of stuff with this girl while I was writing it. It revolves around a boy named Fahad who is adopted by a writer inChicagonamed Faraz. It is essentially a long letter from Faraz to Fahad which exposes the events which led to Fahad’s adoption as well as the differences between the two.

Q. What inspired you to write your first book?

I was mainly inspired by the thought of just creating something I could put my name on. I realized that I could have an impact on other people. As far as influences, my grandfather convinced me what I was doing was entirely feasible. I was also going through my first heart break at the time which in turn provided me with the content I needed to finish the novel.

Q. Did you have a writing ritual when you were writing your novel, and what kept you going?

Honestly, I wish I had some kind of ritual when I write but I don’t. When I was writing the book, I would just work on it whenever I had the time, often late at night. I definitely lost some sleep over it.

Q. As a new and emerging writer, what’s been your greatest highlight?

My greatest highlight so far has been recieving the 2011 YoungArts Award for Novel Writing. I had submitted the first chapter of my next project Intangibles which focuses on an EmoryUniversitydropout who watches all his friends succeed while he attempts to find his niche.
Q. If you weren’t a writer what would you be doing?

If I wasn’t interested in writing and wasn’t writing at all, I honestly would just be another kid in school. I can’t imagine not writing at this point. It is a part of me and I am confident that it will take me far.
Mustafa Abubaker was born in Queens on July 25th, 1993. He lives in Atlanta, Georgia but goes to school at High Point University in North Carolina. He is a Journalism major. He also runs a music blog which you can find here. He is currently hard at work writing his next novel. You can follow him on Twitter @mustafaintheory