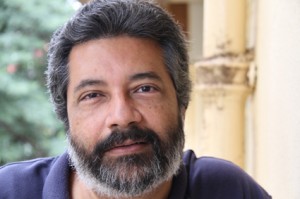 Q. How come we’ve not heard of you before? Tell us more about yourself and how you found yourself writing?

A: Well, quite simply, you haven’t heard of me because you didn’t need to have till now! I’ve been writing since university, but have practised as a lawyer ever since. Still do. I did in effect take a bit over a year off to write the book some years back, but now the writing continues apace alongside the lawyering and stuff I’ve done is produced in India from time to time. I suppose historically there’s been something complimentary about the two fields, law and literature.

Q. Your new play opens in the same month as your debut novel is published. That’s exciting and quite an achievement. What keeps you motivated?

A: The human condition. It’s the driving force, always. And living in a violently vibrant place like Mumbai, it slams you in the face in a million ways all the time. Sacrifice, sadness, ecstasy, rage, glamour, villainy, they assault you at every street corner as you go about your day. And there’s a great story in every one of those little experiences and people.

Q. Your debut novel, God on Every Wind encompasses themes of love and separation, war and and religion. Where did the inspiration for the novel come from?

A: You know, that’s a really difficult question. I’m not an instinctive, ‘inspiration’- driven writer. For me, I sit down, I spin up the bones of a story in my head, and then I write in the flesh, the blood and the gut. The subjective inspiration, as I mentioned, mostly comes from humanity tested by different situations. But I also noticed quite recently that if one were to analyse it a little closer, there are always very strong, iconoclastic women involved. And you know, I’ve no idea why, really!

Q. …and how was it different to writing for stage?

The spurs that get me going are pretty much the same, but for me the process differs somewhat and each form has it’s specific challenges. Most of my playwriting is initially done very rapidly by dictating a first draft into a dictaphone, and then transcibing it to the written word. That way I can both hear what it sounds like and have reviewed it twice before it’s put in written form. Personally for me, playwriting feels less laborious and somehow easier. Apart from the smaller size, having directors and actors fleshing out the your sub-text is a fall back you don’t really have in the prose process.

Q. Moving on to talk about your play, Hard Places which was developed as part of the Royal Court International Programme. What’s the play about?

A: Yes indeed, I’ve been associated with the Royal Court International Programme in India since the start, and I’m truly indebted to them for the worlds they showed us – both creative and technical. The idea for Hard Places came from a brief TV clip I saw about a place in the Golan Heights called the Shouting Valley. Families come to stand on hills on either side of a border fence erected abruptly by Israel and talk to each other with megaphones. Though situationally inspired by this, the play itself is not political, but explores the personal borders and lines that a mother (on the one side) and her son and daughter (on the other) have drawn between each other and within themselves.

Farhad Sorabjee lives in Mumbai, India. A lawyer by profession, Farhad is also a playwright, screenwriter and novelist. His stage work has been seen at the National Centre for the Performing Arts, and the Prithvi Theatre, Mumbai and across India, La Virgule Eurotopiques at Lille, France, and at the Royal Court and Soho Theatres, London. He has previously worked with Rage Productions and with the International Department of the Royal Court Theatre, London. God on Every Wind is Farhad’s first novel.
Farhad’s play Hard Places, originally developed as part of the Royal Court International Programme, will be produced in the UK in September 2012 at the Mercury Theatre, Colchester. Hard Places is a co-production between Tinderbox Alley, the Mercury Theatre and RAGE Foundation Mumbai, and will tour to India after its UK premiere.