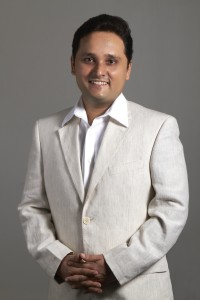 ‘Don’t go to write a bestseller, write honestly. Don’t care what anyone else thinks. Writing a book is giving a voice to your soul, write it the way you want with the purity of your heart.’ This is the secret of Amish Tripathi’s success. If you’ve not heard of him take note. The Shiva Trilogy has sold more than two million copies and in doing so, became the fastest selling book series in Indian publishing history.

‘Frankly I’m surprised by the numbers.’ Tripathi says candidly. ‘I didn’t think my books would be published. It is a dream. I always say I’m living a dream so don’t wake me up.’

Former corporate banker, graduate of IMT Calcutta and MBA educated, Tripathi had no initial ambition to pursue a career in writing. Given his background this comes as no surprise really.

The series started life as a philosophical thesis about good and evil. When he discovered that Hindus and ancient Persians use interchangeable words for God and evil, Tripathi set out to find more. ‘It started off as a way of answering the questions what is good, what is evil?’ Once he got going, the story followed. Although Tripathi did not think himself a creative talent, he hastens to add: ‘I’ve always been a voracious reader. And I think if you want to be a great writer, you have to be a great reader.’

Tripathi wrote the first two books whilst holding down a full time job, writing in the back seat of his car, during the hour, hour-half-long commute to work. ‘If you want to write, you have to make the time.’ He did only three things during that early writing process such was his dedication to finishing the story: ‘I did my job, wrote the books, spent time with my family.’ He stopped watching television, going to parties, and every other ‘time wasting activities’. He didn’t have the luxury of uprooting his family to a fancy location to write (for the first two books, anyway), ‘I don’t come from a rich family, so I can’t afford to be irresponsible.’

After writing the first two books Tripathi was hit by the hard realisation that selling them to a publisher would be just as, if not, more difficult. ‘There was a rare unanimity that the book won’t sell. Everybody rejected my books.’ So how then did he finally bring the books to market with such success?

‘I say if you have no one to back you, you have to back yourself man,’ he says.  This is just what he did. His agent agreed to invest in the printing costs, and Tripathi agreed to take on the marketing. They self published the first book The Immortals of Meluha and after it sold well, the publishers came knocking on the door. The rights were transferred to the highest bidder. But Tripathi makes it clear that he doesn’t advocate self publishing – for him it was a means to an end; to secure a traditional book deal. He carried on working until his royalty cheque could pay his living costs before giving up his job to write full time.

Marketing has been key to the series success. Tripathi and his team have used YouTube video trailers, music albums, previews at cinemas and an effective social media campaign to help drive the buzz. ‘Even great books are forgotten if they are not marketed well’ Tripathi says. ‘It’s a fallacy to think that books sell themselves. There has to be good marketing. I can think of a list of books that should have been bestsellers but aren’t.’ He cites Parva, a retelling of the epic Mahabharata as an example. ‘It is not widely read outside of Karnataka where it was written.’

In the digital world, the pressure on author to become marketer is relentless. ‘The author has to be schizophrenic.’ Tripathi says, on the one hand he has to ‘when writing only care about the story’ and on the other when it comes to selling be ‘practical and pragmatic.’ As a relative outsider to the industry Tripathi didn’t research the market before putting pen to paper and is keen to champion his approach. ‘When writing the book, you don’t care what other people think.’

Preeti Vyas, Tripathi’s wife of twenty two years, has been said to be responsible for the marketing campaigns. ‘I met her when I was fifteen, it took me two years to convince her I wasn’t a bad guy,’ he says. ‘She has not only been fundamental to this, but to my life,’ he adds. It was Preeti who suggested to offer free copies of the first chapter to booksellers, it left readers wanting more and of course, they came back to buy the book in droves.

‘I’m very close to my entire family.’ Tripathi adds, ‘they are my primary circle of advisors, my primary circle of friends, confidantes.’ and it is the family that Tripathi cites as being jointly responsible for his success. ‘My name might be on the front cover, but it is a joint effort.’

It’s hard not to be struck by just how humble Tripathi is. There seems to be little ego. ‘If you’d met me a couple years ago you wouldn’t have said this,’ he says. ‘Bankers, MBA types’ he says, ‘are notoriously competitive’ and Tripathi often found himself comparing himself to his colleagues in a bid to climb the corporate ladder and chase bonuses. ‘But I was unhappy’ he admits. ‘There was a lot of I within me.’ He says about his old life. ‘I thought everything that I did, was down to me.’

Is he more religious now? ‘The books have changed me…I’ve changed as a character…I can’t remember a time I was this happy…The books are a blessing.’ He feels calmer, more grateful than ever. ‘I can’t remember the last time I shouted or got angry…I’m more spiritual now.’

Is Tripathi’s success a sign that Indian readers are championing their own? Tripathi asserts that while previous generations have struggled with celebrating their own writers, preferring to read Shakespeare or Chaucer instead, ‘the younger generation are much more comfortable in their own skin.’ The Shiva trilogy is steeped in Indian mythology, remixing the ancient classics for a modern readership. ‘There is nothing wrong with reading Shakespeare but I can equally celebrate Kalidas and Mirza Ghalib while reading Shakespeare.’

It is this embracing of one’s own culture, that has helped secure books sales. ‘There are writers who are primarily writing to explain India to the West, and those writing about the real India, without the need to make it exotic,’ Tripathi says. ‘If books don’t have relevance to your daily life, you stay away from them.’

It is rare successes like Tripathi’s that is also helping to shift the Indian publishing industry from what he calls an often ‘closed and incestuous in-group’ to one that is progressive and eager ‘to listen to new voices.’ But the battle is not yet won, and there is an uphill struggle for genre writers to secure a publishing deal. Tripathi is less keen to point the finger for those making bad judgement calls. ‘Bad decisions are made, just look at us bankers and what we did to the world.’

The future is looking bright for the young couple. The Shiva Trilogy’s film rights have recently been sold to Karan Johar’s Dharma Productions and since giving birth to a son, Preethi has launched her own children’s publishing company. ‘When my son was six months old we started buying books for him so he could get used to the idea of turning a page.’ Tripathi says. But the largely imported books served little purpose and reflected little of a child’s day to day life in India with pictures of toucans and women wearing bikinis on the beach. ‘They had little cultural relevance to the lives of ordinary Indian children…if the books have no relevance then the children will think they are a waste of time.’

Staying relevant in a world that is constantly shifting seems to be fundamental to Tripathi’s winning formula. And as our interview draws to a close I can’t help but feeling that the Tripathis’ success will help to inspire a new generation of Indian writers and readers.

Described as ‘India’s first literary popstar’ by world-renowned film director Shekhar Kapur, ‘India’s Tolkien’ by Business Standard and the ‘Paulo Coelho of the East’ by Business World, Amish’s unique combination of brilliant story-telling, religious symbolism and profound philosophies has made him an overnight publishing phenomenon.   Amish’s Shiva Trilogy has over 1.8 million copies in print and is the fastest selling book series in Indian history. The first book in the trilogy, Immortals of Meluha was shortlisted for the prestigious Vodafone-Crossword Book Awards 2010.  Forbes Magazine has listed Amish amongst the 100 most influential celebrities in India. Amish tweets at @amisht