Here be Monsters! They lurk and crawl and fly in the shadows of our mind. We know them from ancient legends and tales whispered by the campfire. They hide under the dark bridge, in the deep woods or out on the great plains, in the drizzling rain forest or out on the foggy moor, beneath the surface, under your bed. They don’t sparkle or have any interest in us except to tear us apart. They are the monsters! Forgotten, unknown,  misunderstood, overused, watered down. We adore them still. We want to give them a renaissance, to reestablish their dark reputation, to give them a comeback, let the world know of their real terror.

Firstly tell me more about this series and what inspired it?

It all began with a twitter conversation about three years ago between Jo Thomas, me and a few others. We discussed how the monsters who have dominated the public scene in the last decades—vampires, werewolves, ghouls, demons, zombies—have mostly been from Western popular culture. We also strongly felt that the monsters were over-used and watered down. A monster has no interest in you except tearing you apart or put terror in your heart.

Like the vampires. In short time – about five-ten years ago – we had hundreds of titles out featuring the vampires. Many excellent dark tales and series but in general the impression was that these vampires’ skin sparkled in sunlight, they were hunted by humans while they just felt misunderstood and longed for human company, and they fell in love with the human girl (or she in him – because the vampire was usually male). Nothing wrong with these things and I am sure these vampires didn’t mind.

But we strongly felt that there were darker tales to tell, that it existed creatures around the world that never got any spotlight, who remained hidden, maybe even forgotten, in local folklore and ancient tales.

Jo and I demanded that something had to be done and happily Adele Wearing at Fox Spirit Books shared our mission about showing the monsters of the world. She also agreed with our quest to give the monsters a renaissance as real monsters, a comeback with gorgeous art and in the style of a coffee table book, with short stories, art, and graphic stories.

In the Fox Spirit Books of Monsters we want to show the world not only all the great monsters but also all the wonderful authors in the world, who tend to be ignored in the western popular culture. Who else should tell us about the monsters from their regions but the authors who know them best? Thus, from volume two (Africa) I have searched for authors from the region who can either tell a tale of monsters based on local folklore or create a new monster. I also try to locate illustrators and graphic artists from the regions we visit. The stories must take place in the region.

African Monsters was shortlisted as Best Anthology to British Fantasy Awards 2016 and I think it means we have succeeded in our mission. We have also been tremendously lucky to have strong and established authors in each volume, awarded authors like Nnedi Okorafor, Tade Thompson, Sarah Lotz, Ken Liu, Xia Jia, Aliette de Bodard, Usman T. Malik, Isabel Yap, Jayne Bauling, Jonathan Grimwood and Adrian Tchaikovsky, to name a few. It pleases me that we have also been able to have contributions from new writers in the book, something that gives the books a variety in style and voice.

Jo and I edited the two first volumes together with monster tales from Europe and Africa. Jo unfortunately had to step aside for parts of the Africa production. Following up on this, we decided that I will edit the coming monster volumes alone. I have now edited the Asia volume and will edit the rest of the series. Next volume is Pacific area, coming in November 2017. 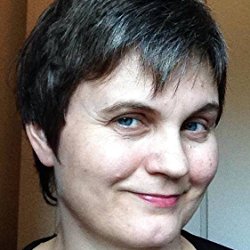 As editor of the collection what was your vision for this particular collection and what were you looking for from a short story or a writer when commissioning pieces?

I wanted, like I do in all the volumes, a wide stretching range in both monster types and what part of the continent the authors are connected to. So, I need both information about the background of the writer plus knowledge of their writing style. They don’t need to be speculative writers, as long as they are able to write dark tales. I have mostly searched for writers before I have seen the stories, with the exception of the few reprints. This is risky business since I will never know how the story turns out or even if they will finish a story.

What makes a good short story?

In my view, the stories that stand out usually have a strong writing voice and a natural narrative flow. They don’t have to be long. I’ve read flash stories that impressed me more than novellas. Language is to me part of the reader experience, and I will enjoy a story even more if the language is polished. Other than this, it can be a feeling in the story, a convincing character development, or an original setting.

What surprised you most about the submissions?

How the writers are able to take myths and folklore and shape it into modern tales. How the books so far have covered all genres. The tales in the monster books can be written as modern stories, legends, survivor accounts or any other format the writers feel will get the monster’s bite across. The stories stretch from crime stories to post apocalypse, from being told from the monster’s point of view, or from the survivor or even the monster hunter. They take place in cities like Hong Kong and Lahore, or in the wilderness of forests, mountains, and the tall sea.

Talk us through the editing process and the challenges for you working with writers who may be new to the process? (for example, how do you tease out the story they are trying to tell?)

We have a few submission rules for the volumes. The stories must take place in the region. They must be dark. We are not looking for satire, humour, romance, erotica, splatter or overly gory stories. I have declined very few stories but they have all been breaking one or several of these guidelines. One story took place in space, another had lengthy descriptions of scenes that would make anyone blush, another was a satire, an other was not a monster tale at all. It really makes you curious about why some authors don’t read guidelines.

Most stories can be polished, and some need more rewriting than others. It is something I work with the authors on in the edits. It can be as small as putting in a few references to geography and place, or rewrite or delete the most gory scenes, to restructure the whole story.

Other than this I give much freedom. Some feels it is too much freedom and struggle a little with finding a good plot and angle. These I discuss a few ideas and possible  narratives with. Some wants me to read an early draft to be sure they are on track.

I give many of the stories critical comments on the contents and plot in the first edits round (like, ‘what do you mean here, it is unclear, this doesn’t make sense, maybe you need to write more here about this, you need to capture the reader at first paragraph – maybe this is the scene you should start with, you have said this before,’ etc etc). I am also strongly in favour of subtleness and building up an unspoken tension but I do recognize that many writers view this differently. So we try to find a balance. In the end, what is important is that the writer’s voice is intact and strong.

Margrét Helgadóttir is a Norwegian-Icelandic writer and editor living in Oslo, Norway. Her stories have appeared in a number of both magazines and print anthologies such as In flight literary magazine, Gone Lawn, Luna Station Quarterly, Tales of Fox and Fae and Girl at the End of the World. Her debut book The Stars Seem So Far Away was published by Fox Spirit Books in 2015 and was shortlisted as Best Collection to British Fantasy Awards 2016. Margrét is co-editor for the Fox Spirit Books anthologies European Monsters (2014) and African Monsters (2015). African Monsters was also shortlisted (Best Anthology) to British Fantasy Awards 2016. She is also editor for the Fox Spirit Books anthologies Winter Tales (2016), Asian Monsters (Dec 2016) and Pacific Monsters (Nov 2017). Learn more at http://margrethelgadottir.wordpress.com or chat with her on Twitter @MaHelgad.