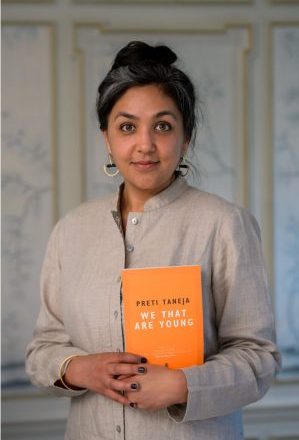 Taneja takes home the £10,000 Prize for her “awe-inspiring” debut novel, We That Are Young, beating fellow shortlisted authors, Gail Honeyman (Eleanor Oliphant is Completely Fine) and Paula Cocozza (How to Be Human).

A retelling of Shakespeare’s King Lear set in modern-day India, We That Are Young explores the play’s themes of severed relationships and warring families against the backdrop of the 2011 anti-corruption riots in India. It follows a central cast of characters as they react to ageing patriarch Devraj’s decision to pass control of ‘the Company’ to his three daughters, Gargi, Radha and Sita.

The novel was chosen as the best debut of the year by a judging panel chaired by Sarah Perry, author of The Essex Serpent (2016 Waterstones Book of the Year), who was joined by award-winning broadcaster, Samira Ahmed and Waterstones’ head of fiction and publisher liaison, Chris White.

Taneja’s triumph marks the second time independent publisher Galley Beggar Press has produced a Desmond Elliott Prize-winning novel. The first was Eimear McBride’s A Girl is a Half-formed Thing in 2014, which also won the Women’s Prize for Fiction and went on to become a major commercial and critical success. The Norwich-based Press publishes just four novels a year and is run by co-founders and husband-and-wife-duo, Sam Jordison and Eloise Millar.

Sarah Perry said, “Samira, Chris and myself were absolutely unanimous in our love and admiration for this novel, whose scope, ambition, skill and wisdom was, quite simply, awe-inspiring … all three of us sat together, shaking our heads, saying, ‘If this is her first novel, what extraordinary work will come next?’”

Before trying her hand at fiction writing, Taneja was a human rights correspondent and reported on Iraq and in Jordan, Rwanda, and Kosovo. Her work has been published in various titles including the Guardian, the New Statesman and Open Democracy. Taneja was born in the UK to Indian parents and spent many childhood holidays in New Delhi.

The Desmond Elliott Prize has a track record of spotting exceptionally talented novelists at the very beginning of their careers. Other past-winners include Anjali Joseph (2011) and Nikita Lalwani (2008).