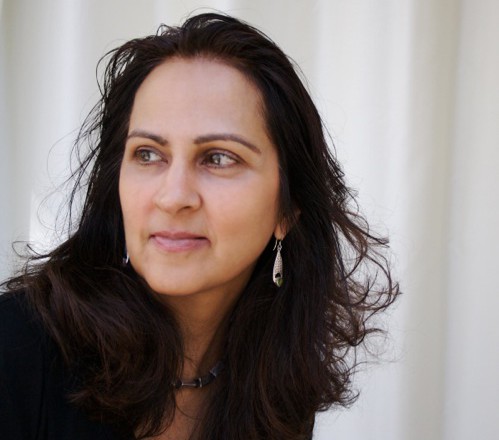 Q. Tell us about your YA novel, Summer of Blue, and what inspired you to write for teens?

Summer of Blue is a novel about hope. It has a seventeen-year-old British Asian girl Milly as its protagonist. Her brother Neel has been abducted and is presumed dead in Afghanistan. She needs three wishes to come true by her eighteenth birthday next summer: get Neel home, get into Cambridge University, get a boyfriend. The title plays on ‘blue’, alluding to Cambridge University colours, feeling blue and the Hindi word for blue –“neel”, also the missing brother’s name.

I have worked as a journalist and still follow the news several times a day. Stories of conflict affect me deeply, and I agonise over an appropriate response. My daughters were teenagers when I wrote the first draft and it was relatively easy to put myself into a young person’s head and imagine innocent lives destroyed by tragic events thousands of miles away. Soon I had a story idea, and I wanted to make my readers reflect even while they laughed.

Q. You write from the point of view of an Asian protagonist living in a privileged Oxbridge world – a world alien to many of us. Who do you write for?

I like to cast a wide net, drawing in every type of reader. As Oxbridge is the Holy Grail for many, the novel is intended for international readers as well as British teenagers. With this story I also hope to encourage students to feel they are good enough to apply to Oxbridge. The statistics are real, the competition impossibly fierce, true, but how will one know if one doesn’t even try? Rejection isn’t the end of the world, either. I have playfully tried to demystify and debunk Oxbridge myths, and the feedback from teenage readers whether Asian, black, white, minority or mainstream, underprivileged or privately schooled, is heartwarming.

Q. What research went into writing the book and making the voice authentic?

There were interviews with young Afghan students, members of the British Army Reserve or the Territorial Army as it was then called, Cambridge students and Sixth Formers in the application process. All on condition of anonymity, naturally. The Internet was invaluable for the latest information on emergent military initiatives but books and journals were also referenced and I once spent an afternoon absorbed in Afghan women’s poetry at the British Library. The Afghanistan backdrop was purely imagined but Cambridge and Mumbai were easy to describe as I live in both cities. As for an authentic teenage voice, Milly’s voice inhabited my head from the beginning. She was her own person, and I knew what she would say in any situation. For a few of the other characters I replicated the public school and university milieu speech of Cambridge. I think I enjoyed creating the Asian voices the most as there were real life “auntie” and “uncleji” types on whom characters were modelled.

Q. How did you go about striking a balance between the politics behind the headlines and writing a story?

The first pages already reveal the seesaw between heartache and hope that is going to be at the core of the story. Then there are deliberate shifts between the reality of military conflict and its gruesome consequences and the capers, pranks, self-doubt and absorption typical of teenagers, to keep those pages turning. The conventions of the YA genre do require that balance – there can’t be doom without respite, tragedy without joy and turmoil without resolution.

Q. What was the writing process like – how long did it take from draft to publication?

The book has taken a long time to see daylight. An early version won a commendation from the Yeovil Literary Prize Committee in 2009. A leading children’s agent was going to take it on but opted out at the last minute and the disappointment made me put the manuscript away for a while. Conscious of the impending British pullout of troops from Afghanistan, I pulled it all together for publication in June 2013.

Q. What are your thoughts on the recent comments made by Malorie Blackman?

If you are referring to her comment that children’s books have a long way to go before they are truly diverse, then I agree, these books could better reflect the diversity of today’s Britain. People tend to think of diversity as only meaning racial inclusion, but diverse content also provides diverse perspectives.

Q. Why do you think there is a lack of diversity in Childrens/YA novels – what more could be done to change this?

This year’s shortlist for the Guardian children’s fiction prize has a story about saving a galaxy, a dystopian adventure and a narrative of grief and guilt. Some might call this a list of safe writing. People point to the control by mass-market forces but an ideal scenario is where authors feel emboldened, when they can write what they really want to write and not merely what they think will “sell”. Publishers, librarians and booksellers need to play their part and support a broadening of the genre.

Q. Finally what advice would you give to anyone working on a YA novel?

First, get the voice right. The rest will follow.
Saumya Balsari was born in India, has travelled over six continents and lives in Cambridge. Named one of Britain’s leading South Asian women, she is also on the 2014 Asian Power List. Previously a London columnist for The Hindustan Times UK Edition and the Bombay Times, she has also been a freelance journalist, teacher and translator. Her first play had a rehearsed reading at the Soho Theatre, London, in 2003. Her debut novel The Cambridge Curry Club (2004) won the first ever Cambridgeshire Book of the Decade Award in 2010. Summer of Blue, a novel for young adults, was released in 2013, and an early version received a commendation from the Yeovil Literary Prize Committee.

Her novels are referenced as university resource texts and thesis citations around the world, while her short prose finds inclusion in various anthologies. Away from the keyboard, Balsari enjoys brushing up on ten languages, fusion food skills and the tango and salsa.

She is currently Writer-in-Residence at the University of Cambridge, Centre of Latin American Studies.