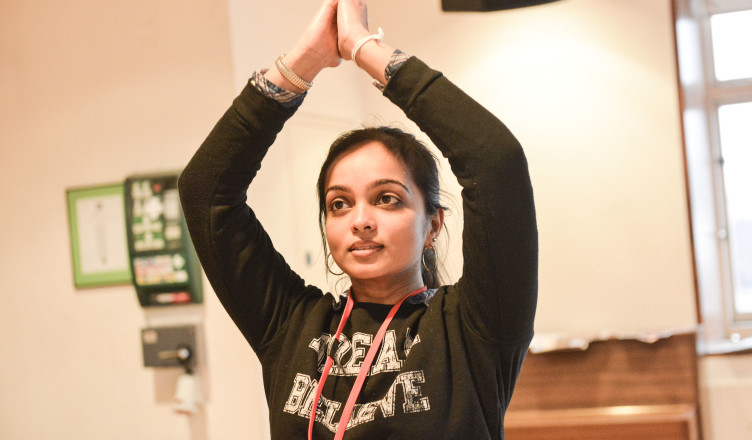 Theatre Royal Stratford East presents The House of In Between, the untold story of the Hijra. The House of In Between follows the lives of a Hijra clan, a family trying to make their way through modern India, while maintaining their culture, traditions, beliefs and values. Written by Sevan K. Greene and directed by Pooja Ghai, TRSE’s Associate Director, the show unveils the secret lives of this community through humour, wit and passion.

The story follows Uma – the leader of a Hijra clan – a tough, caring but charming opportunist who is desperate to uphold the traditions of the Hijras challenged by contemporary society’s increasing demands to modernise and join the global economy. But when the mysterious Dev arrives, Uma sees a chance to erase the sins of the past and ensure the clan’s survival. Will Uma’s act of charity destroy the clan and will Dev fulfil a destiny no one expected?

Although some are intersexed, Hijras are generally born with male physiology. Some choose to undergo a rite called nirvaan which involves removal of the male genitalia.

Writer Sevan K. Greene said:  “I was inspired to write a piece that gave voice to this marginalised group whose stories have been hidden yet resonate so loudly with me with their need to hold on to the past while being slowly razed by the present. Third genderism is a tricky concept so instead of trying to be scientific, I want an audience to understand the Hijra tradition through a very specific clan. All families argue, fight, love, defend, laugh and survive and through this connection I can make the unfamiliar familiar. My goal was to create a visceral play that tickles you one moment and rips your heart out the next.”

Pooja Ghai, Associate Director of TRSE said:  “Hijras have been around for over 4,000 years and have played an important part in the cultural and societal make-up of India. At the time of the Moghul Empire they were revered, now in 2016 they are a part of the underclass and are both feared and deeply misunderstood. I was fascinated by the demise and impending eradication of this group of people, who have always believed they were bestowed with divine qualities, living a life as neither male or female, but as a third gender. Sevan’s beautifully written play is a story about family, hope, despair, unity and love – that takes us on a rollercoaster of a ride leaving us spellbound.”

Pooja Ghai is the new Associate Director at TRSE and is making her directorial debut on the main stage.  Other credits include  Selfie Rules, Rugged Rock (Angelic Tales), Home Theatre, Guess Who’s Coming and assistant director of The Infidel The Musical. Other directing credits include Tamasha 25, Shakti & Seva and Mother India (Rich Mix), As You Like It (Ellen Terry Theatre), The Accordion Shop (Leicester Curve),The Tune is Always Better on the Outside, Oysters, Mirad a Boy from Bosnia (The Bedford) and The Difference (Soho & Rich Mix).

The House of In Between runs from Friday 8 April–Saturday 30 April 2016.