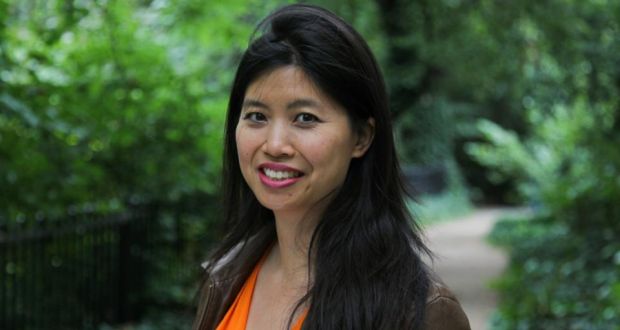 Q. Tell us more about your novel, Dark Chapter

It’s about a crime, and the two people who are connected by that crime: the victim and the perpetrator. They are complete strangers, and their lives intersect almost by random during that act of violence. So I explore their individual lives before that event, you see the crime from both perspectives, and then how both their lives continue to be affected ever afterwards.

Q. When did you decide that this story needed to be written?

So the other important thing to know about Dark Chapter is that it’s inspired by something that actually happened to me in 2008. On a Saturday afternoon in a Belfast park, I was violently assaulted and raped by a 15-year-old boy, who had been following me.

Even a few weeks after my assault, I knew I wanted to write about it.  As someone who’s always been a writer, I felt it was impossible NOT to write about such a life-changing event and try to address its significance.  As months went by, I also realised how many people are affected by rape and how much readers need a novel that does justice to the survivor’s experience — the horror and the injustice of it all — while also showing a path towards recovery.

Even though I was one of those rare rape victims who had the benefit of seeing their rapist legally convicted, a lot of questions remained about that 15-year-old stranger. I wondered what had happened in his life to commit such an act of violence, which then had such a destructive and indelible impact on my own life.

However, I myself had to recover from my trauma before I had the perspective to write about it as fiction, so I didn’t start properly writing the novel until five and a half years after my assault.

Q. Why did you choose to tell the story using fiction rather than non-fiction?

I get asked a lot why I decided to write this book as fiction and not as memoir.  There’s a few reasons for that. One is that there are already a number of excellent ‘rape memoirs’ out there, which were a great help to me in the year immediately after my assault (After Silence by Nancy Venable Raine and Lucky by Alice Sebold come to mind). I didn’t think I’d be contributing anything new to the field if I just wrote another rape memoir.  So what I really wanted to do was explore the character of a young perpetrator, writing his perspective, and intertwine that story with the that of the victim.  And that was something I could only do in fiction, since my real-life rapist was a complete stranger to me.  Writing Johnny’s perspective was quite a creative leap, so I felt if Vivian’s experience closely echoed my own, that would at least ground the project a bit for me.  In other words, Vivian’s sections wouldn’t require such a stretch of the imagination and could offer a bit of creative ‘rest.’

Q. Is there a freedom that comes from writing fiction based on real life experiences?

Certainly there’s a creative freedom that enables you to take a real life experience and make it more impactful of your reader.  And somehow in creating fiction around my lived experience, I was in a way able to exert a sense of control over the trauma, which I didn’t have during the actual crime.

At the same time, it was emotionally challenging to write Vivian’s sections because it meant reliving some of the worst episodes in my life: the trauma, PTSD, and depression. But as a writer, using the close-third perspective offered a bit of distance, and this made it possible to look back on my own lived trauma and try to re-frame it as fiction. I also experimented to see how the language could best reflect the sense of isolation and fragmentation that Vivian undergoes at certain moments. Personally, I guess I cried a lot when writing some of these sections!  But there was also a slight sense of power gained because I could tell myself: ‘Look, I went through that, but it’s over now.  And now I can gain mastery over that experience by transforming it into fiction.’

Q. In Dark Chapter we see both Vivian and Johnny’s stories in alternating perspectives. Why was it important for you to include Johnny’s story too?

Dark Chapter would be an entirely different book without Johnny’s perspective, and probably a book that would have held much less interest for me to write.  By writing Johnny in an empathetic way, I was trying to push the boundaries of what I felt capable of thinking and feeling as both a writer and a survivor.  I also feel that we as a society need to start thinking of perpetrators as human beings whose experiences, upbringings, personalities, etc somehow lead to sexually violent behaviour — they are not born ‘monsters.’ If we’re not willing to understand the contributing factors that lead to perpetrators’ behaviour, we’re never going to be able to prevent this crime from happening in the future.

Q. Stories of sexual assault and harassment have dominated headlines in recent weeks, and a #MeToo campaign on Twitter has highlighted the extent of the problem. Are you hopeful things will change as a result of these revelations?

Absolutely, I think we owe it to society to be hopeful.  Despite all the personal devastation that is caused by sexual assault, collectively survivors have the ability to share our stories and provide the insight and knowledge that can lead to positive changes in policy, attitudes, and public systems.  People just need to listen to us.

That’s one of the reasons I started the Clear Lines Festival,in addition to my writing and academic research around this issue, to create a space where artists, activists, survivors, sector professionals could come together and address sexual assault and consent through the arts and discussion. I actually started Clear Lines in 2015 when I was in the middle of writing Dark Chapter.  I was feeling very lonely and isolated during all that writing, and I wanted to do something that could maybe combat that isolation.  I had started to realise how much art was being created to challenge this topic, and how many people out there wanted to engage with that art and not feel as alone. So if I could create some kind of platform or space for artists and audiences to come together, then that could be a positive, healing step in the right direction. It would also allow us to celebrate the value of creativity and community in addressing this issue. The second edition of the festival is taking place in London, Dec 1-3 at the Rich Mix!  And there will be a literary panel on writing about sexual assault, alongside a stand-up comedy night, theatrical showcases, film screenings, spoken word, etc. http://clearlines.org.uk/

Q. Congratulations on recently winning Not the Booker Prize. Have you been surprised by the critical response to Dark Chapter?

Thanks!  I wasn’t expecting to win, partly because I never thought a book about rape would get the most votes.  But I guess that shows people are willing to engage with this issue through literature.  I think Dark Chapter was rejected by a lot of editors because of the subject matter — and the approach being too up front and unflinching. So finally seeing the book out there, and getting the positive reviews from critics and readers has been incredibly gratifying. On another level, I wrote the novel largely to generate public discussion about rape and sexual assault, so if I can use my own trauma and my own vulnerability to do that, to get people thinking differently about the issue, then I think the overall result is worth it.

Q. How has writing this book affected your relationships with family and friends if at all?

It’s deepened those relationships, for sure.  Quite a lot of my close friends and family admitted they were scared to read my book, because they didn’t want to fully see the violence and the sadness that I was subjected to through my rape. At the same time, I think once they read it, they understood what I actually went through and how fundamentally my life and self-worth were challenged by that crime.  And my friends and family have been so supportive, spreading the word about my book, setting up events for me in different parts of the country — it’s been really affirming and heartwarming.  And I’m nothing but grateful for their support.

Q. Is there anything else you’d like to add to this?

Yeah, I think the hardest part of being an author is the financial part.  It’s virtually impossible to live as a single person in London on a novelist’s salary, and that financial stress takes up a lot of unwanted head-space and energy. I wish there weren’t so much pressure to earn a living through writing, because then I could free my mind to focus on the important part of being an author: the craft and the creativity.  Unfortunately, unless there’s massive shifts in the publishing industry, I don’t think this is going to change. So support your writer friends!  And if you can, buy lots of books!

Winnie M Li is a writer and producer, who has worked in the creative industries on three continents.  A Harvard graduate, she has written for travel guide books, produced independent feature films, programmed for film festivals, and developed eco-tourism projects. After graduating with Distinction in Creative Writing at Goldsmiths (where she was shortlisted for the Pat Kavanagh Prize 2015), she now currently writes across a range of media (including a column for The Huffington Post), runs arts festivals, and is a PhD researcher in Media and Communications at the London School of Economics. She was Highly Commended for the CWA Debut Dagger 2015 and also shortlisted for the Emma Humphreys Memorial Prize.  She lives in London yet is somewhat addicted to travel. Dark Chapter is her first novel.