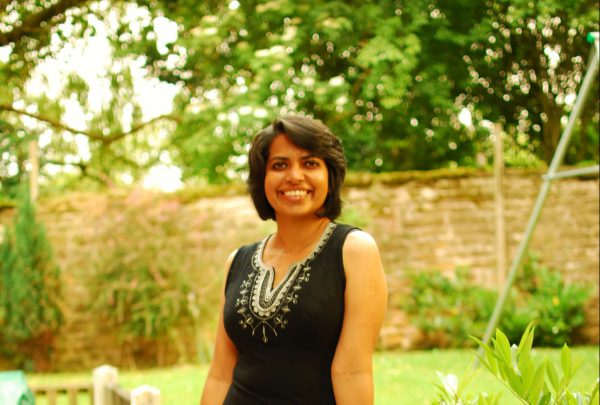 Following a whirlwind romance with a Yorkshire man, Shreya Sen-Handley left a successful career as a TV producer in India, to start a new life in Sheffield. Soon she discovered that life and love was not all that it appeared to be. Her new husband was violent and controlling, and deeply in debt. The chance of picking up her telly career was minimal, and so instead, she found herself with her wings clipped, and working in communications for the Royal Mail.

It wasn’t until she met her second husband and settled down to start a family that Sen-Handley renewed her passion for writing. She wrote for herself initially before penning features for the Daily Mail and the Guardian. But even when she thought that things were finally picking up on the career front in her adopted homeland, she found herself restricted and confined to write about “religion and festivals and Indian women and how badly they were being treated in India.”

“The clock is ticking, we’re told. Get on with it, we’re urged. If you haven’t snagged a man and bred a brood before you’re thirty, you’re a failure, they warn. And while the age at which you hit haghood may have changed, the pressure to marry and breed has not.” Popping the Cherry, Chapter 2, Memoirs of My Body

Unwilling to limit herself in this way, a defiant Sen-Handley set about looking for an alternative path. She turned her attention to the Indian market and was soon writing a no holds barred blog exploring gender politics and female sexuality for CNN India. As the column grew in popularity attracting 25,000 readers a week, Sen-Handley was approached by Harper Collins India to write a book. At the same time, in Nottingham, Sen-Handley found herself at home with smaller presses, such as Five Leaves and Lucifer Press who gave her the freedom to write what she wanted and broadcasters, Notts TV and BBC radio Nottingham who allowed her a platform to share her opinions.

“Patriarchal societies start denying a woman’s sexuality and sex appeal just as she reaches her prime and blossoms into something better than fluffy, something close to magnificent.” Meltdowns and Mommies, Chapter 16, Memoirs of My Body

As part of her research, Sen-Handley interviewed other women too and cites their experiences. She says her writing is a frank exchange on the absurdities of life as a woman but writing with real conviction and honesty, hasn’t always been easy. She admits she’s lost friends and faced criticism because of it. However, she feels incredibly lucky to write about things she wants, reminded that there are still only a select few people who are afforded the privilege and sees her role as the outsider who pushes the door open to allow other women to tell their stories too.

“Sex is something we tend to hide and see as dirty.” Shreya Sen-Handley

We talk about sexual harassment and violence against women as well as the #metoo campaign. Sen-Handley sees it as a sea-change. “Things are changing because more of us are speaking up and we might be taking two steps back, but it feels like we are moving forward, even if we’re taking baby steps all the time. There is hope in that these books are being published. We’ve come along way.”

A former television producer and broadcast journalist, for the likes of CNBC and MTV, Shreya Sen-Handley has built an illustrious writing career, working for The Guardian, The National Geographic and Times of India. In addition to a media career in both Britain and India she has seen her short fiction published on three continents.