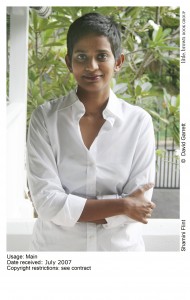 For readers new to your work, what would you say defines your writing?

I have to confess that I don’t think there is a single strand or theme that defines my writing. Perhaps it is a combination of factors that conspire to create a unique voice. First and foremost, place. Each Inspector Singh novel is set in a different Asian country – Malaysia, Singapore and Bali so far. As each country is so unique, it’s like having an extra character thrown in for free.

Speaking of characters, Inspector Singh, who is a composite of any number of my relatives, has been unexpectedly popular. Although, to be frank, I think he might be one of those people best left to fiction. In real life, he would probably be very tiresome (as are my rellies!). Finally, I seek to discuss at least one issue of contemporary importance, whether racial or religious issues in Malaysia, draconian laws against drugs or homosexuality in Singapore or the spectre of terrorism in Bali.

Where did the idea for Inspector Singh Investigates come from?

I actually write a series of children’s picture books which are very popular in Asia, the ‘Sasha visits’ series which involves a little girl travelling to various places such as Bali, Bangkok, Tokyo, Beijing etc. I found it a little bit frustrating to have so much more to say about these destinations than a picture book for young children allows. It struck me one day that perhaps I could co-opt the idea and develop a similar series for adults. Hence, Inspector Singh Investigates!

Your ‘about page’ tells us that you once worked for an international law firm and travelled around Asia, before resigning to be a stay at home mum. When did you realise you were a writer?

Hmmm, still waiting for the other shoe to drop, I’m afraid.

I think of myself as a lawyer who writes, a retired lawyer, sometimes even a failed lawyer – but I don’t dare think of myself as a writer in case the whole adventure comes to an abrupt end. My background as a lawyer has helped the writing enormously because of the travel the work involved, the interest that I have in legal issues as they affect individuals in this part of the world (Asia) and a lot of practice meeting difficult deadlines!

What was the transition from lawyer to stay at home mum to writer like – and how has motherhood changed you and your life? Do you think it gave you the opportunity to write?

The major transition in my life was from lawyer to stay-at-home mum and not so much to writer. After the initial high tide of maternal hormones had ebbed, I discovered that I did not have the unselfishness required to be a full-time mum. Writing fits the bill because, in theory at least, I am home with the kids. In reality, they often say to me, ‘Mummy, stop thinking about your books!’ when they can sense that my attention has wandered from a re-enactment of Ice Age 3.

If I hadn’t found myself at home with the need for an outlet, I would never have become a writer. I actually enjoyed being a lawyer and didn’t see myself as someone with a story to tell. And, in fact, I tried all sorts of other things from teaching university part-time to importing fairtrade products into Asia, before I turned my hand to writing. Looking back, it does seem odd to me that I should have worked so hard to avoid what, in retrospect, seems like a fairly natural fit.

Going back to those first writing experiences, did you initially begin writing for children? Do you still write for children – please tell us more!

I began with that well known classic, Sasha visits the Botanic Gardens! Again, I was slightly agenda-driven. Shopping for books with my own small daughter, I realised that not an awful lot had changed since I was a child. Children’s books were still largely published in the West and a token minority presence was the most one could hope for in a book. If the main character was a person of colour, the book was quite likely to feature a bizarrely exotic tale. I wanted something ‘ordinary’ – about everyday life – for my daughter but featuring this region.

In the end, I decided to set up my own publishing company and began the Sasha series. I have since gotten completely carried away and written numerous picture books as well as two children’s novels, Ten (about football and growing up in Malaysia) and The Seeds of Time (a fantasy with environmental themes – sort of Harry Potter and the Inconvenient Truth!)

Who do you write for? And who do you think is reading your work?

Aside from my mum? I don’t really have a particular audience in mind when I write. It’s actually too scary to think of strangers reading one’s book while it’s still at the draft stage.

I imagine the Inspector Singh novels might appeal to women, lawyers, anyone interested in travel or the law, crime fiction readers, people familiar with the region. My brother informs me that the books have too much ‘local’ content but as he’s only just read the first one I don’t plan to take his criticism to seriously until he’s made more progress with the series. Other readers have insisted that it is the minutiae that most appeals to them – the little details about the people and the culture that carry the story.

You deal with some sensitive issues albeit with a light hearted – easy read – approach – what’s the response to your work been like so far at home and across the world?

This has been the most heartening aspect of the series. I have been given an opportunity to write about things that I care about, issues that interest me and readers appear to enjoy the foray into serious stuff as long as they have Inspector Singh for company along the way. I really do think that crime fiction is a great prism through which to explore the tensions within modern Asian society.

As a Malaysian, I have to confess that every time my passport gets stuck at the auto-gate at the airport, I assume that someone in authority has taken a dislike to my books. So far, it has always been an electronic glitch!

Mr Singh’s had three stops, what have you got in store for him for the future?

The next book is set in Cambodia and explores the long shadow the Khmer Rouge has cast over modern Cambodia. Next stop India although I have to confess I have no idea what that story will be about. After that, Inspector Singh is in the hands of my publishers – let’s hope they look upon him with a benevolent eye as I have plenty more stories to tell.

You seem like a very busy person who wears many hats, how do you find the time to write?

I have a huge advantage in that I am basically a closet workaholic. I find it extremely difficult to pass my time unless I am writing or researching or driving the kids to football classes. Of late it has been getting a little bit too much, trying to write in so many genres at once – but I don’t want to give anything up!

If someone told you tomorrow that you’d have to go back to being a lawyer and give up writing what would you do?

Look in the cupboard and discover that none of my smart suits fit anymore? I think I would very much miss writing. On the other hand, I miss the law right now. That probably sums up my character – never satisfied no matter what. It might be why I’ve written Inspector Singh as someone who knows how to relax – it’s probably my way of vicariously resting.

Lastly what advice do you think Inspector Singh would give to aspiring authors?

However, if they were to ask me, I would say keep plugging away. That breakthrough might be just around the corner.

Shamini Flint worked as a corporate lawyer before resigning to be a stay-at-home mum, writer, part-time lecturer and environmental activist. Her Inspector Singh novels are published by Piatkus. Her Sasha travel series of children’s picture books have been enjoyed by armchair travellers all over Asia.