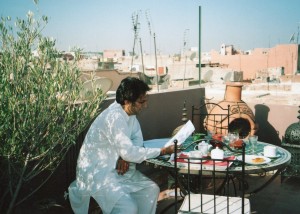 STARBUCKS, near the corner of Albert Square is crowded with people taking a break from their office work; smart men and women reading a book or a newspaper. There were many strangely named coffees and at the beginning I was confused; espresso, cappuccino, caramel macchiato- all expensively priced.  The cups would be too big for a coffee- and I paid the high price because I didn’t want to look stupid in front of the pretty smiling girl; when all I wanted was a simple cup of regular coffee.

Across the road there was the central library of Manchester, a huge round building, one of the land marks of the city. Here I was going to write my stories, my first novel. It gave me time and peace; sheltering me from the cold wind and rain- and all for free. This is something that shouldn’t be underestimated for a writer starting out; a place where he can write without having to worry about the cost. I will always be grateful to the British library.

Finding a quite desk, the writing would begin with a pencil or a pen. I wrote in long hand, still do, and not straight onto the laptop like a lot of writers. It’s a process that feels natural and makes me more creative. People who have never written cannot understand what a writer does and how difficult this novel writing is; they hear of the big authors, the great amount of money they make and say this writing thing can’t be all that hard. Sit down, write a quick book and hey bingo, the money rolls in. If only it was that simple, but for most writers until the day they make it, they are going to embrace poverty and not riches. A famous writer once said that- In any other profession, to work without getting paid would be considered ridiculous!

At first I began to write a novel, jumping in at the deep end when it might have been better to have started with a short story or two. There was no idea about what I was doing, only a creative urge to write. No one in my family read, it wasn’t an activity that we thought about or did. There were no books or novels in the house. No one that I knew in my immediate family, aunts, uncles or cousins read novels; one or two might have read religious books but that was about it. Sometimes the fact that I have entered this whole literary field amazes me.  No satisfactory answer has yet come to mind but the one doing the rounds in my head at the moment- is that I wanted to tell a story my way. That is, in my vision.

My first attempted novel was some kind of thriller; the hero had to save a VIP, there was a love angle and some Chinese spies thrown in for good measure. I probably threw in quite a lot for good measure. NO reading what so ever had preceded this writing effort but I found that I liked the creation of characters, story and enjoyed the process.

I soon realised that writing is a lonely occupation, but even this observation didn’t hit home until much later. The writing was engrossing me. It took about three or four months and the first novel was finished; its length around 180 pages, and that was all. Polishing the opening chapters, all one had to do was to find a publisher and send it off. The strong expectation was that the first publisher would accept my ‘masterpiece’ and send me a fine cheque. Fame and fortune were waiting for me.

After a few weeks, my novel was returned through the post with a standard rejection letter. ‘Thank you for sending us your manuscript, but unfortunately it is not to our liking.’ The rejection didn’t affect me because there was no understanding of rejection. The novel was sent out again and after it was roundly rejected, it occurred to me that I needed to improve the novel.

The very first draft had been sent out with poor grammar, spelling, and no editing. But it had been a good learning process and I was starting to get hooked by this writing hobby, more than hooked, it was taking over my life.

Then my reading began with Dickens- Great Expectations. All the other books in the book store meant nothing to me; they didn’t exist in my imagination. I slowly discovered other writers- American, French, Russian and Indian; the more I read and practiced writing, the better I became. The challenge now was to become a good published writer- with the emphasis on Good. Hard work followed and after another six years of effort- my first novel THE HOUSE OF SUBADAR was accepted by Arcadia Books and published in 2006. In 2007 it was shortlisted for the Glen Dimplex New Writers Award, Dublin. A literary feather in my cap and I was very pleased by this.

I am working on the completion of my second novel and hope that too will be accepted for publication. If not, then I’ll just start on the next novel. A writer has to keep writing; have talent, determination and luck.

To find out more about Vijay Medtia and his work please visit www.vijaymedtia.co.uk